Spending our way out?

So, the spending review concluded that, in a nutshell, we need to review our spending. What else could it find?

Like an errant child extending a student loan to pay for frivolities, as any immature adult with new-found powers to borrow and spend naturally will, New Labour racked up the spending during its youth and now, struggling to find gainful employment, it gripes and moans as ‘the olds’ have to be parsimonious to avoid the bailiff. “No more boom and bust!” puffed their chancellor, while laying the ground for the biggest bust we ever did see.

You can jail all the bankers you like but it won’t bring the money back – it was recklessly lent to those who couldn’t repay it and fed fuel to an unsustainable boom. You can cut back on welfare, which expanded to ever more unaffordable and shameful levels under Labour, discouraging work and suppressing wages in an effort to buy voters by putting everybody on state life support. But you can’t just borrow your way out of debt. Nobody lends to a loser; see how this works yet, Labour?

The opposition’s rhetoric on borrowing to invest sounds attractive to the same infantile minds that always vote for them – those who struggle to cope with the simple realities of life and those who would eagerly exploit them. But it amounts to little more than a monetary perpetual motion machine, appearing to work just so long as somebody is injecting top-ups along the way. The goose can only lay the golden eggs if you feed it. Labour running the economy is a bit like relying on wind turbines to power a modern society – unproven, unreliable, ideologically driven, costly and ultimately doomed to failure and the scrap yard (probably a German one).

But they are right about one thing. It is human nature to hoard and those with the means to do so will naturally pass on their gains to their descendants, who will then get a start higher up the ladder and with less effort be able to increase their own wealth. Better education, established contacts, passed-on property, familial investment savvy, freedom from early debt; all of these are advantages conferred on the offspring of the successful and unavailable to those outside their circle.

While ‘the poor’ start with nothing and few are ever able to rise above that state, the rich undeniably get richer. Of course they do and they choose, in the main, to associate with those similarly blessed. But enviously and punitively removing their incentives to do so will only result in capital flight and then everybody gets poorer. Solve that conundrum without driving away talent or removing incentives for entrepreneurialism and you just may have a redistributive policy that works. Until that epiphany occurs The Eds simply cannot be trusted with the purse strings; it would be like letting your teenager run the household. 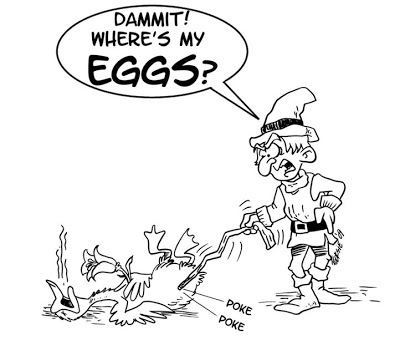 The coalition might be struggling to put together the national omelette but at least they are honest about the difficulties and resolved enough to carry on. Labour would borrow, buy far more expensive, ready-made, powdered omelette mix and pretend to themselves that no eggs had been broken.