The vengeance of the little muzzie sod.

Over the weekend Anjem Choudary held an anti-alcohol rally in Brick Lane, threatening business owners with 40 lashes if they failed to bend to his will. This open threat of extreme violence in the name of sharia law has been steadfastly ignored by police, who continue to allow Choudary to spread his hateful dogma unmolested. Choudary is beyond the law now and will continue until all non-muslims have abandoned the region and he gets to establish his caliphate.

So, I thought I'd loosely adapt The Green Eye of the Little Yellow God, by J. Milton Hayes, because that monologue was written about another mad bastard. I hope you can forgive me. (By the way, I don't capitalise islamic references as I don't regard islam as a proper noun.)

There's a swivel-eyed, idle beardy to the north of The O2,
There's a bunch of hating muzzies in the town;
There's a broken-down society in the hands of Andy Choo,
And the crazy bearded bastard gazes down.

He was known as "Andy Choo" by the subs at Wapping News,
He was madder than they felt inclined to tell;
But for all his foolish pranks, he was praised on taxi ranks,
And by the ginger convert mongy ones as well.

The ginger convert mong had worshipped Andy all along,
And his man-love yearning crush was plain to all.
He was nearly twenty-one and arrangements had begun
To clean up Tower Hamlets; kill them all.

He wrote to ask Mad Andy if there was anything he could do
They met next day as he dismissed a squad;
And jestingly he told him then that nothing else would do
But the assistance of the Tower Hamlets Plod.

On the night before the demo, Choudary seemed in quite a trance,
And they chaffed him as he puffed at his cigar:
But for once he failed to smile, and he sat alone awhile,
Then went out into the night to find a bar.

He returned before the dawn, with his shirt and tunic torn,
And a gash across his temple dripping red;
He was patched up right away, and he slept through all the day,
And the ginger convert watched beside his bed.

He woke at last and asked if they could send his tunic through;
They brought it, and he thanked them with a nod;
He bade ginger search the pocket saying "That's from Andy Choo,"
And he found the note from Tower Hamlets Plod.

It read “Do what you like, we’re not looking for a fight”;
And ginger’s eyes were strangely hot and wet;
He lead the sharia patrol and reinforced the muslim zone
With the permission Anjem drunk all night to get.

So if you go to Brick Lane now, you’ll find the offies all closed down;
And female faces banished from the street;
You’ll see filth and you’ll see squalor, it will make you want to holler,
But you’ll never find a copper on the beat.

Because the place is Choudary’s now and to allah they all bow;
While treating ‘Andy’ as a prophet to that god;
An ugly stain has fallen on the heart of London Town,
And it’s the vengeance of the Little muslim sod. 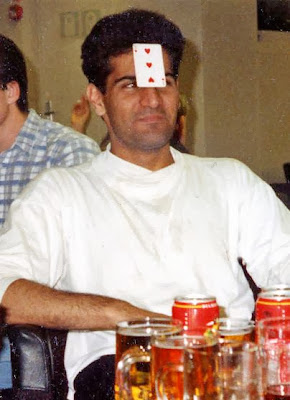 There's a swivel-eyed, idle beardy to the north of The O2,
There's a bunch of hating muzzies in the town;
There's a broken-down society in the hands of Andy Choo,
And that crazy bearded bastard gazes down.
Posted by Batsby at 07:48

Email ThisBlogThis!Share to TwitterShare to FacebookShare to Pinterest
Labels: The green eye of the little yellow god