Kissing babies. Who in their right mind would want a politician kissing their baby? Yet that’s what they did, back in the day. Thankfully that odious practice appears to have been consigned to the waste paper basket of electoral strategy. Unfortunately, the fish out of water technique of getting in everybody’s bloody way hasn’t. Thus every available pair of soft, clammy hands was suddenly on deck to kiss the metaphorical babies of the flood victims. That will be the flooding which, as far as Westminster was concerned, only just appeared out of the blue in the last week?

Christmas. It was as long ago as Christmas that thousands of homes were left without electricity after the first winter storms. Not a politician in sight. Then, week after week the rains came, the waters rose and people in the area began to get angry as the largely avoidable after effects compounded the damage. Finally, after an inadequate government response Eric ‘sandbag’ Pickles was despatched to shore up the coalition. And he did. He did and said the right thing. He said sorry. He admitted not enough had been done. He apologised again and pledged support. (And if you are in any doubt as to whether he was right to criticise Smith, you should read this article on what the Environment Agency is really all about.)

And what happened? For the act of not backing up the lily-white boys of privilege in their inexcusable sloth he was berated. Honesty was NOT a policy any side wished to be equated with. Neither sympathy. Nor action. But then, after giving good old Eric a dressing down for doing the decent thing, it was as if Westminster’s own floodwater broke and the Southwest was deluged once more; this time by a torrent of airtime-hungry, ne’er-do-wells fighting over each other to be seen to do exactly what Eric had done. They must genuinely believe we are stupid, as false promises and insufferable platitudes dripped all day from our speakers.

The LAST thing the people of the Somerset Levels need is to be descended on by film crews and politicians, looking for their fix of disaster porn. And in a brazen and breath-taking show of making political capital from the losses of these beleaguered people Ed Miliband appeared in his wellies to make it clear that “now isn’t the time for politics”. One day – I’m not holding my breath – I would like to see a senior politician shut the fuck up, roll up some sleeves and grab a shovel, a sandbag, some debris… and actually DO something. Because unless you are actually there to help - not just 'fact-finding' - all you are doing is getting in the way.

And apart from moments of inept unintentional comedy, such as when local MP Alok Sharma asked Miliband exactly what he thought he was doing, the sum total of his contribution was to look exactly like the pointless,opportunistic gob on a stick he is. Oh and he kept touching people in an insincere and slightly creepy way that would get him punched over and over again if he tried it on the kind of ordinary people to whose votes he believes he is entitled. 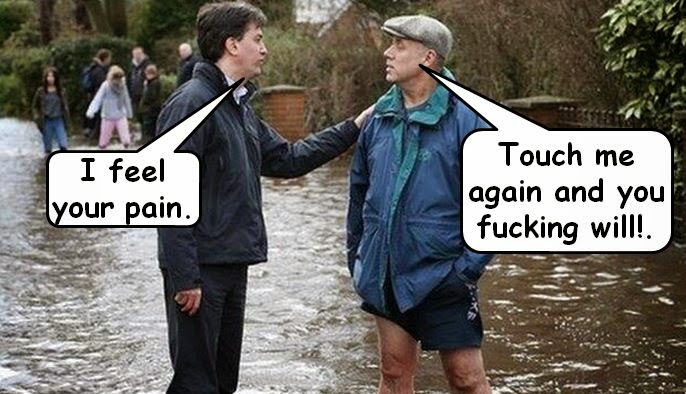 No amount of money will put things right, so David Cameron’s heroic soundbites last night: “Nothing is more important than dealing with the floods” and “Money is no object in this relief effort” do nothing to paper over the cracks. But if the flooding has done one thing it has shown up how little the lives of ordinary people intrude on the Westminster bubble. It’s been going on forever, but since the New Labour project bounded onto the stage, government has drifted ever further away from the people it is supposedly there to serve. Not until votes were under threat was it clear that Westminster had even noticed.

So, Labour, Tory, LibDems, if you were scratching your heads wondering why millions of people are considering ‘throwing away’ their votes on UKIP and worrying about them splitting your voting base in many marginal seats, there’s your answer. While you were all ignoring the anxieties of the population over immigration, falling wages, housing, education, Europe, the economy, HS2, foreign aid, the NHS, rich foreigners buying up half of London, multiculturalism, riots, violence, FGM, creeping islamification of inner cities, the loss of British identity, pensions, the return of tuberculosis, slum landlords, electoral fraud and on and on and on… while you were ignoring all of that the whole nation was storing up the kind of resentment towards central government that you are seeing in Somerset. 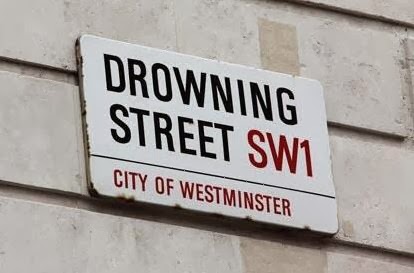 So, by all means go and dabble in the mud pies, get yourself on the telly trying to look like you give a flying fuck, but don’t think appearing in the lapping waves will make you anything other than the useless Cnuts we all know you are.
Posted by Batsby at 07:59