I almost feel sorry for politicians. Almost. I mean where DO you get your economic advice from? From the hoi-polloi who are mere cogs in the machine, the spare parts that come together to make it all work? Or the highly paid experts employed without restraint, their every pronouncement treated uncritically? Or the lobbyists paid to reward you for a favourable nod? Given that the great majority of the population have to live with the worst outcomes of government policy you might think they’d ask the electorate more often, especially as none of the experts seemed to see the crash coming even though ordinary people had been wondering for a decade how come the non-working family over the road had acquired several mortgages and a 4x4.

Throughout history most parts of the world have experienced what could be termed ‘natural disasters’. Floods, droughts, landslip, earthquakes and even bushfires are all part and parcel of living on earth. And every nation, every community has its memories – often living memories of ‘The Great Flood’ or the ‘The Great Drought’. So, naturally the politicians are going to turn to the record keepers at local and national level before coming – or jumping – to any conclusions. But no, instead of asking the people who live with it, they once again turn to the advice of ‘experts’ who concoct some vast eternal global theory to explain a localised, short-term event.

I would trust those with stewardship of the land every time before I placed trust in a theorist who has never donned a pair of wellies. And so, probably would you. Which is why it is even more unfathomable why these people are always the very last to be consulted, although I think I know why. By the time the politicians ever get to ‘the spot’ the damage has always been done - why would you leave Westminster if there isn’t a problem? And, powerless to actually do anything, these same politicians are only going for selfish reasons; to LOOK as if they care. And when they get to ‘the spot’ they find that everybody there is very angry with them, not only for doing nothing beforehand, but for daring to show their useless faces after the event.

Bewildered, the poor souls are driven to apologise for something they had nothing to do with, accept some crackpot reasoning, pre-briefed by their experts and resolve that ‘something must be done’ hoping that whatever that thing is, that they only just heard about, they at least pronounced it correctly on national television. Job done, they then hop aboard their helicopters and head back to Party HQ to watch themselves on the news. It rarely ends well. While a locally born and bred MP may have already been genuinely helping out, nobody asked for and nobody wants a safe-seat, quota-satisfying airhead getting in the way. So once the sound bite has aired the nasty journalists then cut to bitter locals decrying the arrogance of the gobshite they were prevented from confronting directly. 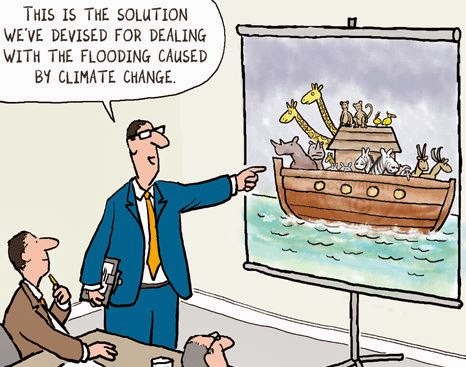 “Why did nobody tell me this would happen?” ask the confused politicians, “How could you let me make such a twat of myself?” and “I STILL don’t know what that means!” No sensible person would expose themselves to such ridicule as a Philosophy, Politics and Economics graduate does when out of his depth. But the rule of the expert holds firm and true. Just as climate ‘experts’ can’t predict the weather and economic ‘experts’ can’t predict the future state of the economy, political ‘experts’, it seems, know absolutely fuck-all about politics. Isn’t it about time we just stopped listening to the experts altogether?

(For what it's worth the Met Office agrees with me about the floods. Click here.)
Posted by Batsby at 08:48