So Red Ed’s ever helpful colleagues have decided in the wake of the not very surprising Greek election outcome to lurch further left and lead a popular people’s revolution. Really? Maybe they have forgotten that Greece is not the same as the UK. For instance, our economy is not utterly borked. Furthermore it is our economy and that of Germany and France that is, as always, paying for the mistakes of ‘junior’ partners in the EU debacle. Anti-austerity Party? It’s laughable because it is largely the misguided pursuit of socialist dreams that unbalanced the UK and made it necessary to engage in the minimal levels of so-called austerity we have lived with for the last few years.

Nobody is starving, nobody is neglected – at least no more than they were under Labour, under any government, in the last fifty years. There has been class-war-based strife in every decade of my life and no matter who was in power, the other side – the last election losers – have claimed they are ‘destroying’ the country. This is the sequence as I have experienced it: Labour get in, borrow and spend, bribe the electorate, promise them the earth, then run out of money, at which point the Tories return to Westminster, tell some unpopular truths and grab hold of the reins again. Meanwhile Labour activists bleat and moan and agitate about austerity until, just as we are getting back on track they have managed to convince enough people that the medicine is nasty. Repeat ad infinitum.

The Greek election outcome is not exciting because it heralds any new (golden?) dawn for Greece. There will be no resurgence of the proletariat; there is little but trouble ahead for the beleaguered country. But what IS exciting is how the next few months will play out as Syriza discover that the schoolboy politics of revolution do not impress the adults of the EU who dole out all the pocket money. Where will Greece end up when they forego their next bailout? When they renege on their debts will the EU expel them? And if not, will they come to an accommodation? Either way it will cost us all and Labour will be cheering on the little man who won’t pay his way – try refusing to pay tax and see how they react then.

None of that cold reality matters one jot to Labour who love to shout about Tory ‘ideology’ while all the while supporting dogma so dog-eared even the communists abandoned it years ago, along with the millions of people they butchered in the name of progress. Countries like Greece joined the EU so that they could benefit from sharing the prosperity of sensible mature economies, not so that those economies could reject their restraint in favour of a socialist free-for-all. Birthplace of democracy? Graveyard of civilisation, the way it’s going. 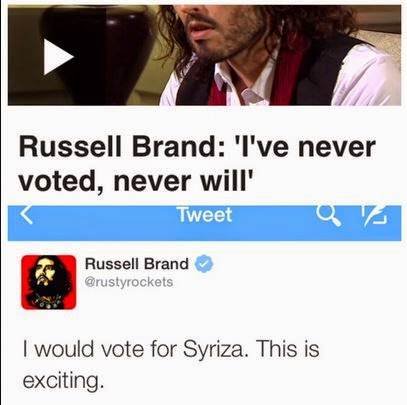 Well, if Russell's backing them...

So for me it’s grab the popcorn, pull up a pew and sit back to watch how some proper mental, not-joined-up thinking can grind a country into the dirt far faster than any level-headed government. Beware of Greeks bearing gifts, they say – this may just be the gift that keeps on giving.
Posted by Batsby at 05:37