Much has been made of the ring fencing, reinforcing and bunging a roll of razor wire on top of the UK’s foreign aid budget and rightly so. While many desperate people could sorely use that aid, it is rare that very much actually ends up where it was intended. I well remember collecting milk bottle tops to send in to Blue Peter in the nineteen sixties, expecting to benefit blind people, only to watch in horror as they spent the money raised on a batch of Labrador puppies. I was outraged; we all love a puppy but why taunt the blind with a delight they can’t even see?

In the nineteen seventies it was the crisis in Uganda that attracted the funding and inevitably it ended up as far away from being used for aid as was possible. Now nobody is claiming as any more than coincidence that shortly after several million pounds was sent by the British government, Idi Amin commissioned a grand new palatial residence, but I knew the architect involved and he once told me this story:

He only met the fearsome president of that benighted country on one occasion and that was at the handover of the newly completed Presidential palace in 1977. He had been dreading the event and had attempted to leave the country before completion but found his passport had been handed over by his hotel to the authorities with no reasons given. He had no choice but to face the Butcher of Uganda in person and show him around the premises.

The architect recalled the recorded instructions he had received from Amin himself; staccato commands barked down a microphone and spat out into the room from the tinny speaker of a cassette recorder. The president had demanded a statue in every room and in every prominent position throughout the vast house but had left no specific instructions. Perplexed, the architect had obtained busts, statues and tableaux of prominent figures through the ages – statesmen, heroes, thinkers. At first he had been very cautious, but a note of flippancy had entered his selections as the project had reached his final stages and with no feedback he had simply carried on.

Thus when The Last King of Scotland arrived to survey the place, the architect was fearing the very worst. He cringed up at Amin’s great, black shiny face as he presented himself and led the way up polished white steps flanked by gleaming Corinthian columns and to the imposing front door. Lackeys opened the doors wide and the dictator stepped inside, beaming at the acres of marble and gold within. Eschewing the carefully planned route, Amin strode independently about and peered into this room and that, nodding his approval and laughing heartily as he contemplated the generosity of the British charity system.

As Idi patrolled past statues of Napoleon and Nelson, Wellington and Isambard Kingdom Brunel his expression changed from satisfaction to curiosity. He peered at the bust of Marx and cast a quizzical glance at Freud. But the architect blanched when Amin stopped in front of a life-sized statue of Laurel and Hardy and turned to face him. “What dis?” he demanded, “What is dis nansense?” Servants shrank into the shadows and Amin’s bodyguard unshouldered their weapons. The architect belatedly realised that it is never a good idea to assume that despotism comes equipped with a sense of humour.

He decided to brazen it out. “But I followed your exact orders, he blurted out, “I placed a statue in every room!” Amin placed an enormous fat hand on the back of his neck and squeezed. The architect sensed he could crush him like a grape; he quaked a little. Amin’s grip tensed a moment then began to vibrate. Opening his eyes the architect saw that he was laughing, his great shoulders heaving and his be-medalled chest jangling. “You stupid English!” said the ruler. “No, no, no, you silly Billy-Billy!” 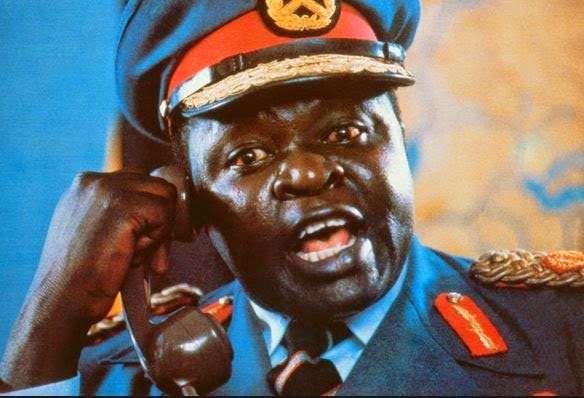 Stepping back and releasing the architect Amin composed himself and mimed the dialling of an old-fashioned, wall-mounted telephone. He waited a moment then imitated the ringing tone with an uncanny accuracy. “Bring bring… bring bring…” repeated the dictator several times. Then, fixing the architect with his gaze, he laughed once more and boomed out. “Hallo der! Is dat you? Is dat you?”
Posted by Batsby at 05:32