One of the non-negotiable planks of the European Union is the free movement of workers, enshrined in the Treaty of Maastricht. EU citizens are entitled to:
·         look for a job in another EU country
·         work there without needing a work permit
·         reside there for that purpose
·         stay there even after employment has finished
·         enjoy equal treatment with nationals in access to employment, working conditions and all other social and tax advantages

It is held as an entirely settled matter that this is wholly a good thing, much, I imagine, as the rewriting of history to portray the British Empire as unremittingly evil is also seen as ‘a good thing’. There is black and there is white (except when it comes to race) and no gradations in between. The new establishment is simultaneously able, as it did yesterday, to both denounce violence in the name of islam and yet declare without twitching that the same barbarity has nothing to do with islam.

We are not dealing with rational people here; our governments, whether through some misplaced sense of moral justice, allegiance to some higher authority or simple blind obedience to the EU creed no longer even pretend to represent their people. Elections are meaningless; simply mechanisms to return MEPs to office where they are then expected to vote like cattle, being milked on command and at regular intervals with entirely predictable results; ever more laws, ever fewer freedoms. There is no democracy here, so if the commissars say free movement is always good then it must be so.

People, taken as a whole, include murderers, rapists, child molesters, madmen, disease carriers, fanatics, zealots, manipulators, traitors, human-haters, psychopaths and a whole different order of untermenschen, barely fit for inclusion under the general definition of humanity. How can a system which allows people who genuinely need to be restrained for the greater good free access, as a near-sacred right, to hide among the masses be acceptable? And why should the control of national borders – a system which has maintained order for centuries – be a bad thing?

By a similarly warped metric, diversity is always good, even where it brings conflict, and segregation into communities is always bad… except where it is a community which self-segregates and then abuses the laws and tolerance of the people it has segregated from. It seems some diktats override others, especially where it involves minorities of any kind. Discrimination is a bad word, but ‘positive discrimination’ is encouraged, especially where it upsets the normal order of things. Equality – an impossible outcome – is the dream of those who believe in all this stuff, yet women-only organisations, events and selection lists are fine 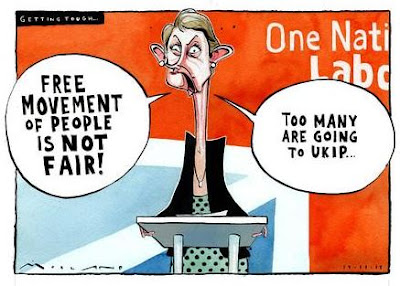 Stop thinking for yourselves!!!

I take all this and many similar perversions of the historically natural order to be entirely consistent with the notion that the idea is the thing, whatever the consequences. Just as Labour’s ‘the party comes first’ outburst betrayed their deeper thinking, the EU’s insistence on open borders when it is clearly disastrous to throw together incompatible cultures shows their utter contempt for the lives of ordinary people in pursuit of their goal of a country called Europe. It seems to me that we handed over the word ‘democracy’ to the Newspeak think tank and if we want it back we’re going to have to fight for it.
Posted by Batsby at 07:29