Much hue and cry on the Interweb at the revelation that Jeremy Corbyn once had a dalliance with Diane Abbott in the nineteen seventies. As the Telegraph story has it “The couple reportedly went on a tour of East Germany together on a motorbike.” Way to go Jezzer[sic]! But my, how he loved that bike. It was a cranky classic IMZ-Ural ‘Cossack’ in keeping with Jeremy’s beloved Russian ideology and he looked after it as if it were a delicate child, so much so that he always a kept a small tub of Vaseline handy and rubbed it over the thin and delicate Soviet chrome-work if it ever threatened to rain.

That motorcycle was his pride and joy and so enamoured of it was he that he was certain it would also impress Dianne’s parents, who he been persuaded to meet on their return from the grand tour of the glorious Deutsche Demokratische Republik. The happy couple rattled and bounced along some of London’s last remaining cobbled streets, with Diane’s bum perched proudly around the pillion. Overhead the skies were a gloomy overcast grey. Rain? Maybe, he thought, but not just yet; after all his elder brother Piers is a weatherman and a little of the lore had washed off. As he parked up he reached for the Vaseline but Diane interrupted his preparations and pulled him to her.

She whispered in his ear: “I have to tell you something about my parents before we go in. I know you like to debate politics around the table but please, please don’t do it tonight. When my family eats dinner, we don't talk.” Jeremy is aghast; what other purpose is there in gathering over food but to discuss the burning issues of the day and plot the revolution? But Diane pleads, “Please? Seriously, don’t say a word.” And then, in a whisper she added, “Anybody who speaks during dinner has to do the dishes." Jeremy nods his assent. He quite understands; while he was growing up his parents had servants to do all that.

When they enter the house he is astonished. Everywhere there are dirty dishes. In the hallway is a huge stack of unwashed plates and bowls teeter on every step of the stairs. In the middle of the living room, a neat but grubby pile of dishes sits on the coffee table, surrounded by a tangle of food-encrusted cutlery. And then in the kitchen, the sink is piled high with dirty crockery. There must be a dozen dinner services, he deduces, all unwashed because of some stupid rule. Jeremy hates rules and decides there and then that when he is Prime Minister he will abolish them.

The dining room, thankfully, is neat and the table formally laid. After introductions they take their seats and Diane catches Jeremy’s eye. She holds a finger up to her lips, mimes ‘shush’ and blows him a kiss. Dinner proceeds in total silence save for the sounds of mastication and the occasional gulp and slurp. This is bizarre and Jeremy, ever the rebel, decides to see how far they will stick to this ridiculous principle. He leans over to Diana and plants a long, deep, tonguey kiss on her lips. Nobody says a thing. Emboldened and curiously aroused, he pulls her to her feet and strips her naked, then takes her right there on the table, in front of her open-mouthed mum and dad. Still not a sound.

He had already noticed that Diane’s mum was still a handsome woman and so, amazed at getting no reaction, he dismounts Di and takes her mother in a passionate embrace. Then he gathers her into the astonishing tableau amid the turnips on the table and proceeds to have a frenzied three-way with the two women who, although by now both highly aroused, still utter not a recognisable syllable. During all this time the father has said nothing and has a look of iron resolve on his poker face. He is a man of principle and by god he will not give in now. 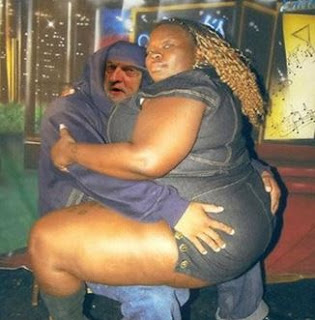 Is that the Vaseline in your pocket, or...?

Jeremy comes up for air and notices the first drops of rain on the dining room window. His thoughts immediately fly to his beloved Cossack outside in the yard and he leaps off the table and dives for the zip pocket in his leather jacket. For a moment he looks bereft but then finds what he has been fumbling for. He brings out the little jar of Vaseline and holds it up, whereupon Diane’s dad stands up, flings his napkin on the table and shouts out "All right, all right... I'll do the fucking dishes!!"
Posted by Batsby at 04:32