Snake in the Grass

The ongoing gore-fest that is the EU referendum circus shows no signs, yet, of hitting the brick wall that surely awaits it. The ‘in’ side is doing its level best to paint the worst of all possible outcomes should we leave and in the process resorting to the same tactics it deployed against Ukip in the general election. Like the serpent in Eden, Project Fear’s slithery messengers rely on repeating the same jaded message and insisting that dissenters are cracked, unhinged, or just plain evil. Go on, vote to sssstay, they sssay.... jussst do it.

A stab in the back here, a Question Time plant there, a ringer on a radio phone-in – chip, chip, chipping away at the credibility of lifelong outers. “What about your pensions?” they suggest, “Will you still be able to afford to travel?” they hint. “No more curry if we leave” they opine. They are trying to snake their way up to your ear’ole and sow the seeds of doubt. A leap in the dark. What if you are wrong? Better the devil you know. The devil, as it is told, often adopts serpentine form, the better to do his evil deeds.

But not everybody is afraid of snakes. There are more vivarium’s in these damp, cold islands than you may realise and a thriving community of herpetologists (which is not what it sounds like) quietly keeps a spectacular variety of Hissing Sids in climate-controlled comfort far from their native lands. Not all of these exotic Hades-worms are strictly legal and rare, venomous escapees occasionally cause upset in the neighbourhood. An epidemic of small pets disappearing is often the first clue.

Many snakes, however, are not poisonous at all and given that they spend most of their time motionless can become a bore after a while. A lot of would-be snake charmers quickly go off their captives and there is a steady and regular exchange of scaly herpeforms which goes under the radar of general commerce. eBay, particularly does a fair bit of trade and it was in answer to an offering on the auction site that a potential buyer expressed an interest.

A young blonde woman (of course she was a blonde, you know how this works, right?) was seeking a buyer for her pet python, which had outgrown its cramped quarters. She posted a picture of the giant reptile but, of course, a snake is a snake and without a feature in the photograph for scale a three-foot baby looks much like a ten-foot baby-eater. So the potential buyer sent a direct message to the seller to ask for more information. How big is it, he asked? 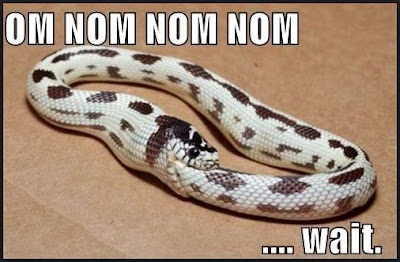 Her reply was a simple, “It’s massive”. He responded, perplexed, “What do you mean, massive?” She wrote back, “enormous”. The would-be buyer persisted, "Yes but how many feet?" For a few hours there was no reply, so he tried again: “How many feet?” Eventually she replied, “None. Didn’t you see the picture? It’s a sodding snake!”
Posted by Batsby at 04:30