Stereotypes exist for a reason. They allow us easy access to a wide range of reflexive responses, eliminating the need for reasoned analysis:


If you think those stereotypes lazy, here’s a beauty. The laziest of all stereotypes is the positively bone-idle example of a hooded, tattooed thug, parked on the sofa, smoking skunk and scratching his all-too fertile balls in front of always-on reality TV, living a life free of worry, free of effort and free of all responsibilities. You can actually picture this right now and that's because these people do exist. The people who made them, however, will bend all the laws of the human universe to deny it. But it makes no difference because a stereotype is also a pattern, a mould, into which many of us have been poured and left to set, to conform to type.

Stereotypes act as handy ciphers to aid understanding and prepare our defences – see a crop-haired, androgynous, chunky female on the television and I don’t need to be told I am going to hear about wimmin’s rights and general lefty issues with a touch of anti-Zionist sentiment tossed in for good measure; oh and ‘men’. It alerts me to the need to find another avenue of entertainment and so avoid having to listen to tired and irrational arguments about misogyny, racism and the evils of the very free-speech, capitalist society that gives her the freedom to practice her free-preaching.

One of the truths about a stereotype is an inability in many to rise above the programming. So when I heard about Donald Trump cancelling his Chicago rally because of violent protesters I didn’t need the telly to picture the general dusky hue and temperament and political persuasions of the multi-culti rent-a-mob; it's just the same over here. It’s interesting though, when the islamists make common cause with the lefties to protest against a third party stereotype. This is a dangerous act, for without the Trumps, who will defend the left and their pets when islam  takes over and sharia reigns? 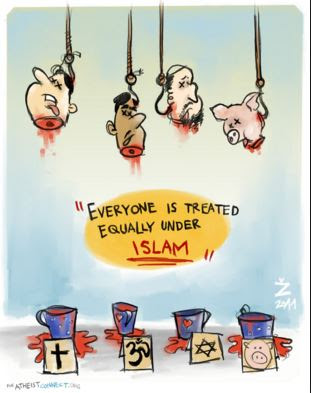 See, Trump may be a chump to many but his targets are legitimate ones. If there is to be common cause for a better future the allies here ought to be the left and right of the west versus the utter wrong of the rest. The events in Ankara yesterday should be yet another warning about the dangers of allowing in the Trojan horses of the stereotypical muslim world. We should be hearing the protest against the avowed invasive intents of islam and all who would harm us and burn down our culture, what's left of it. We should be hearing it from all sides, in both ears. In stereo.
Posted by Batsby at 19:33