We all expected Project Fear. We all expected the Remainders to embark on discrediting the character of any high profile supporters of Brexit. But I’m not sure we expected the desperate levels of depravity to which they have sunk. Plagues of boils, being overrun with African migrants from the jungle (in Calais), destitute, friendless and isolated; there is a gleeful apocalyptic pessimism behind every Remain prediction of doom for an independent Britain. Tory MPs in particular have clearly been ‘persuaded’ to abandon long-held convictions – perhaps they have been threatened with some new convictions?

The thing about the Remainders is they think it’s all over. For Britain. They think that a thousand years of history, of exploring and bestriding the globe, must be put firmly in the past and that we must settle for a common future in the European Union. They are behaving like old men finally accepting defeat and living out their years in the retirement home, staring at the fading wallpaper and forgetting about what they once were as they sip their tepid, greasy soup and gum their thin white bread into edible submission

That word, settle. Settling is what you do when you trade freedom and ‘settle down’ into a more mundane life, from which even the smallest adventures of the past look more glorious. It’s what you do when you think you’ve exhausted the optimism of the single life and imagine that together you’ll be better. For both sides, settling often means lowering your sights and putting aside what might have been. Settling implies an acceptance of less; the very word, settle, is loaded with compromise.

Settle comes from an Old English word meaning ‘to sit’. Sit down, know your place, stop fidgeting, be content with your lot, settle down... behave. It implies the end of joy and the onset of mundanity and in the case of settling for the EU, it is loaded with the same foreboding that marriage holds for men. There is, of course, the prospect of the settlement reached in divorce. It may be messy, we may come off worse, financially, but it’s better than settling down and waiting for the end, having your decisions made for you as if you weren’t competent... or even there in the room. 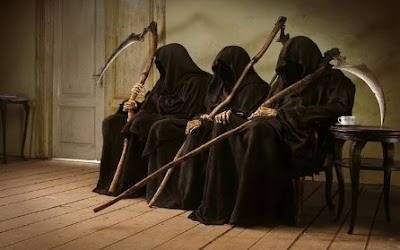 Settle down. Soon you will be at peace...

Remaining in the loveless marriage that is the EU is settling for less than we could be. It is giving up; giving up on our future, giving up on our past and the longer we stay, the less individual we become. The EU is the end of Britannia, indeed it is one of the very aims of federation. Voting to remain is voting for our wings to be clipped and for future generations to be taught to fear flying.

David Cameron’s campaign is based on his supposed settlement with our EU overlords. It’s a crock and I’m just not ready to settle; it feels too much like approaching death. So, “Do not go gentle into that good night. Rage, rage against the dying of the light.” And to the EU say, "Settle off!"
Posted by Batsby at 05:26