See? See what democracy did? Donald Trump was never meant to be president of the USA, it was decided it should have been Hillary, god damn it! The Italians are supposed to have a totally disunited and chaotic government, not be united under a common feeling of national pride. The Poles, the Hungarians; where do they get the notion that their country should be run for their own benefit? And as for the filthy disgusting, backward, British pigs...

How dare they disagree with their replacement by imported aliens? How dare the English parade their jingoistic crusader flag at any time, let alone at international sporting events? How dare the British celebrate their heritage, their ingenuity and their huge contributions to civilisation? How dare they, in the face of being utterly despised by their own establishment and institutions, resist the deliberate indoctrination of their children by cultural Marxists? And most heinously of all, how dare they vote to leave the parasitic clutches of the law-bringing, life-giving EU [peace-be-upon-it]?

For years now we have established the correct way to vote. If the electorate get it wrong, they are told to think about what they have done and change their minds. It’s not difficult, is it? But no, the British still don’t know how to do it. Even when told the correct answer they insist on childishly giving the wrong one. I swear they do it on purpose. So we are going have one more go; the next referendum will literally be the referendum to end them all;

To avoid confusing the stupid Brits, the only option will be to endorse the statement “I agree that democracy has run its course and must be abolished.” And to avoid any confusion over ridiculous situations where a narrow majority somehow considers it has ‘won’ we must be clear; one single such agreement with the statement will dictate the result. So it will matter not one jot if 30 million people spoil their ballot papers; a spoiled paper is an abstention and not a vote. One ‘yes’ and the motion will be carried.

To assist we will employ those most faithful servants of god and the people, the imams. When you can no longer rely on the native population to behave in a decent democratic way and do as they are told, what else can you do but call on their replacements? Work is already well underway in installing islam at the heart of British life, but until every son is called mohammed and every daughter aisha, the enrichment of the breeding stock must and will continue apace. 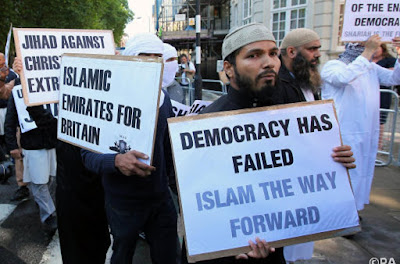 British values? Pah! You clearly didn’t value them enough to exercise the freedoms you have exported around the globe, so now you will pay for taking your eye off the ball. Europe is already fallen and the fight against democracy is almost won, so just keep not-doing what you have not been doing and we may, just may, promise to be merciful in your defeat... in-sha-allah.