David Lammy has been driving up his blood pressure again as he leapt aboard the anti-Trump train. The serial race-baiter couldn’t help but plough in with his obsessive aversion to the biggest white whale of all - the so-called leader of the free world. And so bizarrely sensitive to the baiters was Mrs May that she wobbled in the Commons yesterday as she tried to pretend she wasn’t going to cosy up to The Donald when he visits and was instead going to stand up to him. (Clue: She’s not.)

National leaders and supposed opinion-formers the world over are screeching negatively about his tough illegal immigrant border policy, even as their own constituents are loudly cheering him on... But what should we do, let them all in? There is a category of out-of-touch, new-world-order advocate that would simply throw the doors open wide. Come on, come all, for, in their eyes, all darker-tinged foreigners are somehow ‘better’ than all pale, gammonous, indigenous nationals.

Downtrodden people from rough, brutish regimes are sold dreams of riches in the first world and then aided and abetted in their quest by the dreaming acolytes of the political left. And yes, the world perhaps should be a lovely, fluffy place where everybody respects and loves everybody else. But the peddlers of this never-to-be-realised fiction are rarely disadvantaged by the realities that come with it, whereas those who are most directly affected are denied the voice to object.

What we see – every time - is these whole-worlders violently attacking the only part of society which pays for it. Metaphorically and sometimes literally biting the hand that feeds it. Desperate people, from barbaric cultures, promised a heaven on earth, are slow to adopt the tolerant laisse-faire attitudes of the generous host and instead revert to the methods that worked in their homelands. And the response when we point this out? “But what about ze cheeldren!”

The bleeding hearts simply cannot comprehend why we can’t put up with a bit of mild cultural displacement, segregation and ghettoisation in the interests of world peace. What’s a bit of moderate white flight when several million net recipients get to share in our barely adequate resources? So your kids have to become minorities in their own schools and you get to wait a few more years for your hip replacement? It’s a small price to pay, surely, in order to increase the maternity ward bed count. 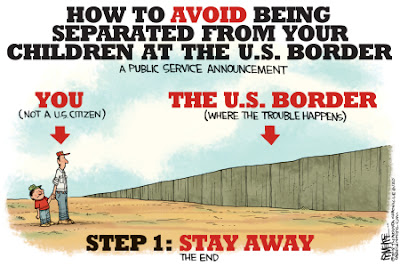 What is wrong with wanting to keep what we have worked for? Why should we pay for illegal immigrants to simply pour across our borders and then demand – literally demand – that they be fed and clothed and housed and educated and treated and settled and be absolved their original crime and excused any further crimes? Why should we celebrate their malignant presence as ‘enrichment’ even as they preach against the very western values they have milked? Trump is dead right to stand firm. Put up with it? Why should we?
Posted by Batsby at 09:52