The Pharaohs were probably the first to actually build their kingdoms on sand. And look where they are now. The history of civilisations has a recurring theme of genesis, growth, power and decline. And the decline, where it is not brought about by conquest, is usually accompanied by decadence, a phase which can extend over many scores of years. There can be little doubt that European culture is in decadent decline right now with little sight of resurgence on the horizon.

There is much talk afoot about rebuilding the economy, but on what? ‘Eat out to help out’ is just a form of welfare, as are many make-work schemes tried in the past. An economy must surely be founded, first and foremost, on solid, tangible things that people need, closely followed by things that people want. Only after those requirements are fulfilled should there be room for frippery.

According to Tweeter Harry Wilkinson 62,544 students sat A-Level Psychology this year, and if his information is correct this well outnumbers those taking subjects which might get them a job doing something useful. Psychology and all of its disreputable offshoots is an example of an industry founded on sand; on the shifting sands of people’s susceptibility to fashionable maladies.

Haute couture, lifestyle, art, etc. all become worthless when you are starving. In times of sanity those who graft should first get to put food on their tables, yet it is those same workers, whose value is measured by the production of real things, who are always closest to the breadline, while those who eschew usefulness for idle distraction dressed up as necessity get well paid by the grafters for producing nothing of substance. The emperor's seamstresses.

Fine art, fashion, film, literature, theatre, etc. yes, of course, these things do improve people’s lives. Man, after all, does not live by bread alone, but eyebrows, tattoos, 'reality' TV and coffee to go; are you shitting me? But it’s worse than that, for these are the distractions of the dull and as such are pretty harmless and do involve an economy of some substance. What is not harmless, however, is the creation of an economy based on blame.

Daddy issues, race relations, gender discontent, class warfare and the whole panoply of LGBTQIP+++ delectations and miseries (and I apologise if I have unwittingly missed out your favourite self-flagellating, minority-of-one peculiarity) create nothing of any worth, yet are often rewarded handsomely. We used to scoff at the American fascination with therapy and the prescribing of medication to ward off the stresses of simply being alive, but we are in serious danger of succumbing to the same moribund non-solutions to simply living. 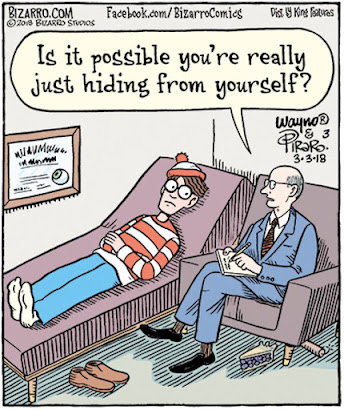 As we try and drag ourselves out of quarantine, as the lockdown eases, the media is awash with all kinds of experts offering handy excuses, disguised as diagnoses of all manner of syndrome. Children being interviewed about their exam grades readily employ the lexicon of amateur psychoanalysis as they refer to the deteriorating state of their own mental health. They are, quite literally, talking themselves into the talking cure. We should not be indulging this decadent assumption of lasting harm; what they need is a good dose of pull-your-socks-up and be told to stop wallowing in their misery. And the last thing we need right now are more bloody psychologists.

Email ThisBlogThis!Share to TwitterShare to FacebookShare to Pinterest
Labels: psychoanalysis