I’m not sure there is an actual word in the English language to express how little I care that a potential illegal entrant into Britain has died as a result of his attempt. So, you broke through a perimeter fence, strode past all the warnings signs and deliberately jumped off a dangerous, signposted cliff and died? This is the stuff of farce, not tragedy and I owe you not one single thing. No, not even your life, and certainly not the rest of your life on benefits.

A French MP for Calais was interviewed on the PM programme and blamed Britain. It was our fault that we spoke English, the second language of some of the contestants in the new reality show: “France? Get Me Out of Here!” It was easier, he said, to find black market employment in Britain, and with armies of human rights lawyers, far harder to deport. Despite crossing all of Europe in their quest for an easier life, the countries of the EU owed the UK nothing, as far as stemming the tide was concerned.

We are on our own, then, as it should be. And if this is the case we need to take a more aggressive stance towards countries, unions even, which actively work against our interests. It isn’t beyond comprehension that migrants will soon be picked up on the beaches of Greece and bussed all the way across the continent to Calais. Hell, they’ll be flown there in chartered splendour, to await the French-sponsored ferry crossing which will bring 2000 at a time, twice a day, 365 days of the year, thus fulfilling our regular mandated intake with ease.

There is something wrong in the heads of everybody who would cheer such an endeavour, seriously wrong. These are not people who can enhance our island in any way. So why does no political party address the real concerns of the great majority of the British about the dissolution of their identity? Why does no party even properly acknowledge that legal mass immigration, let alone illegal invasion, has already done great harm and now poses an existential threat?

Our message to migrants (they are not ‘refugees’; most are not even legitimate ‘asylum seekers’; their mission is venal, pure and simple.) should be clear and simple. We don’t want you, we won’t take you, we won’t protect you, and we will use deadly force to repel you if we have no other recourse. You will find no welcome here. And if you do manage to enter our country you will do so as a criminal and we will hunt you down and remove you.

Your life here will be one of fear and squalor and you will be exploited by criminal gangs made up of your own countrymen. You will never be British and you will know no respite from vilification. We will treat you with contempt and every person you encounter could be the one who reports you to the authorities. All that awaits you in Britain is misery and harm and when we return you to the shithole you came from you can pass on that message. 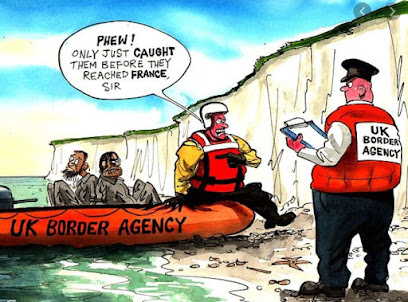 We may never recover what we have lost, but we should at least attempt to limit the further damage coming our way. And if ridding ourselves of this human garbage, this effluence of human waste from wasted lands makes us a pariah state in the eyes of the oh-so-uncorrupted United Nations and European Union then we should embrace that status with both arms. Man up, Britain, and rid ourselves of this vermin.