The late, great, member of Parliament once said “It is like watching a nation busily engaged in heaping up its own funeral pyre” and they all mocked him. Foretelling a time when Britain would no longer look like Britain and the British would be marginalised, sent to the back of the queue and reviled, despite their outstanding contribution to the world, he has been vindicated. In the last few decades all he predicted has come to pass.

The whip is firmly in the grip of those who would tear down institutions and customs and destroy an entire culture without even a hint of the compassion shown towards them. The invading army of immigrants, fifth columnists and home-grown malcontents, with scarcely a backwards glance, wish to raze to the ground every reminder of the people who invented and built the modern world.

Britain was not ‘built by immigrants’, rather it assimilated talent from the world, having first laid the foundations. As the ancient world declined it was Britain and, yes, England in particular who forged the new. The English were first among nations and as the United Kingdom we were formidable not just for our might, but for many less demonstrative, but admirable qualities. Stoic, bearing hardship in silence. Just, standing up for the oppressed. Inventive, yet modest about our greatness. Philanthropic, asking little in return.

And unlike the bombastic Americans, the emotional southern Europeans, the authoritarian Germans, or the impenetrably secretive Soviets, we bore our burdens in silence and our triumphs with an equal lack of fanfare. Had The UK been the first to land on the moon our Neil Armstrong would have probably just had a quiet cup of tea and toasted the Queen, later to retire to the countryside dismissing the Herculean feat as merely a spot of good luck, actually.

So why, having ruled the waves for so many years have we now lost control of the greatest asset we ever had? Whatever happened to “This royal throne of kings, this sceptered isle, This earth of majesty, this seat of Mars, This other Eden, demi-paradise, This fortress built by Nature for herself Against infection and the hand of war, This happy breed of men, this little world, This precious stone set in the silver sea, Which serves it in the office of a wall Or as a moat defensive to a house, Against the envy of less happier lands. This blessed plot, this earth, this realm, this England.”? 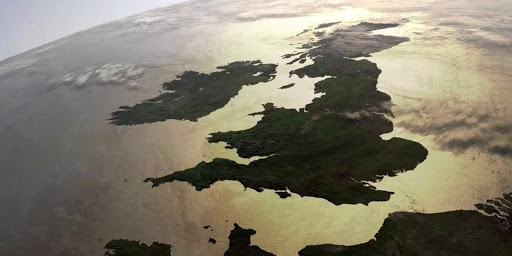 This precious stone set in a silver sea

Where is our dominion over our own borders? Who filled in the moat? And why are the savages of those envious, unhappy lands conquering us with barely a finger raised against them? Where is our backbone, our fierce but quiet determination to remain a free people? Having freed the world why must we now be enslaved, and by our own rulers, too? Why must we allow our demi-paradise to become a living hell?

The boat migrants are our mortal enemies. Even much Commonwealth immigration has been bad for us. We have allowed foreign people to set up camp then proliferate unrestrained until whole towns have become alien to ‘the British people’. We have even allowed some among us to say that using that very phrase ‘the British people’ is somehow divisive ,unhelpful and part of the problem.

But wasn’t it the British people who cheered them when they did well? Didn’t we slap them on the back and sing their praises when they won medals for the country they were proud to belong to? We voted them into positions of power and influence and we even ennobled them.

The British people are not the problem here. We welcomed those who wanted to become British, but why should we welcome those who simply want what we have? We owe the false asylum seekers nothing, not even their lives. And if, as many would point out, it is as a result of British involvement in geo-politics, we should point out in turn that The British People have never been consulted about that, just as we have never been consulted about importing millions of uncivilised, potential criminals into our midst.

For all their words, I don’t believe there is a single soul left on these islands who believes that the government – any government – has the will or the means to do what is necessary. They dare not even say it. These incomers must be repulsed with deadly force. Not a single one should be landed on our shores and if the only deterrent is their demise, then let that be their fate. Making the route ‘unviable’ sounds to me like ‘find another route’. No, we must make all routes hopeless.