You say you want a revolution?

For years the discussion of what is clearly an existential issue among white British people has been suppressed. The white working class has been frowned upon by the liberal intelligentsia, for whom all cultures are equal except our own and especially by the leftist ideologues who have assumed positions of power throughout the state. Even the Conservative Party has succumbed to a soft left-of-centre stance on a great many issues, and the prickly subject of immigration heads up the ‘do not properly discuss’ list.

The fascist fantasists, Hope Not Hate, (aka the muslim brotherhood and surely the most ironically named outfit since the thuggish black-shirted Antifa) have dreamed up a report on Patriotic Alternative and spun the narrative, yet again, of a far-right resurgence. In support, our supposed security forces are still claiming victories over unseen ‘far-right terrorist plots’ further bolstering the fear in those same soft, left politicians.

The contrary opinion of Britain as a whole, as given by Katharine Birbalsingh will, of course not be given due regard, in much the same way as her stand against progressive education has fallen on deaf ears among those in the education sector who desperately need to listen. So riven through with concern about upsetting the minority is our governance, from local authority to the Palace of Westminster, that the wishes of the majority always appear to go unheeded. This is not only no way to run a country, it is to all intents, the very opposite of democracy.

Paralysed by doubt and uncertainty and terrified of appearing authoritarian, successive governments have sat on their hands on issue over issue, presumably in the hope that the problem will go away. Don’t expect a serious conversation about race, immigration, welfare, the running and role of the NHS, defence, law and order or the extent to which our institutions have been overrun by ideologies which could have come straight from the Kremlin. Instead of debate we get soundbites; instead of action we get photo opportunities.

If it isn’t abundantly clear, western liberal democracies have become moribund, useless exercises in appeasement, when what is needed is clear direction, certain rules and unmistakeable purpose. All this confused business of various agencies deciding they need to ‘hold the government to account’ should not even warrant a thought. If we could only trust our elected politicians to do our bidding, that accounting would only need come at election time.

Instead of leadership by an elected cabinet of engaged, dedicated and forceful characters we end up, instead, with people who have gained their positions by carefully managing not to upset the rabble of competing minority attention-seekers. With an 80-seat majority the current government ought to be able to do what it damn well likes, but it is looking increasingly as if it is constantly seeking approval to tentatively meander in ever less ambitious directions. What, exactly, are the government’s policies? 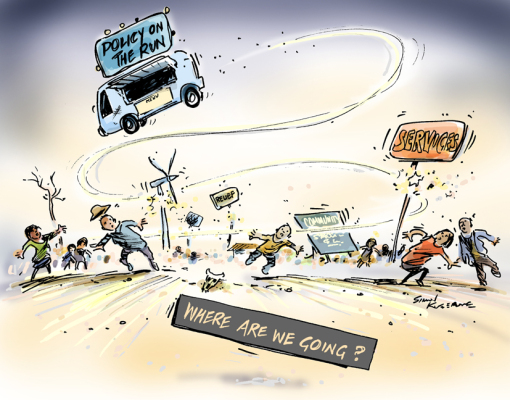 And it is no use looking to the opposition for an alternative. Following Blair’s rule by carefully selected focus group, Labour is determined to alienate and ignore its former core vote by introducing all BAME shortlists. They don’t even seem to see that they are part of the problem. As was always the case, if you want anything doing right, do it yourself. Individualism is the first recourse of the disaffected. The second may need to be revolution. Do you hear it coming?