It is not unheard of for the nominal right to engage in a touch of hyperbole. Having lived through the closest we actually came to British Communism in Harold Wilson’s union-dominated government and seen the lust for power in Michael Foot’s rheumy revolutionary eyes, we have occasionally been a tad over the top in our accusations of red flagism. The more honest of us know that a little bit of thoughtful socialism can only be a good thing. But those who repeatedly claim that they alone possess the moral purity to rule society make our exaggerations look unambitiously modest.

I say ‘the nominal right’ because unlike the battalions of card-carrying, hard left warriors for the cause, righties tend to be more taciturn and far less likely to bother with pointless things like membership, or constantly redefining what we are for or against. This is largely because we know what we stand for and that is family values, tradition, and giving a man a fair go. We are, in fact, the majority and the fat cats the left always point at are nothing to do with us any more than Sir Keir Starmer can be said to be typical of Labour voters.

One of the defining traits of the organised left appears, irrefutably, to be a level of hypocrisy that would astonish the most ‘agile’ mind. The holding of two contrary views is said to induce the phenomenon of cognitive dissonance, which can only be resolved by an effort of ideological subversion of logic. So the claims that trying to ban an alternative view news channel in the interests of ‘free speech’ comes as no surprise at all. Let’s face it, if they can champion women’s rights while simultaneously insisting they admit women with cocks and beards into their exclusive spaces, pretty much anything is possible.

This is, of course, the story of Andrew Neil’s nascent GB News channel, which has yet to air a single broadcast and whose fairness and balance has yet to be tested, and the extremity of the opposition. The usual voices are raised in banshee wails of woe and the most ridiculous claims of bias. Woke slebs across the land – and especially on Twitter – are demanding that their acolytes boycott advertisers who dare to try and find a market via a channel which will likely appeal to people with more spending power than, say, Novara Media… or Owen Jones’s hobby echo chamber.

So finely tuned to offence and ‘hate speech’ and ‘far right’ themes are the usual lefty suspects that they can actually see future offence. Somewhere in the bowels of Labour HQ, you can imagine a trio of precogs channelling their predictions into the left’s own Minority Report, all the better to prosecute the crime before it has even been thought of. That they cannot see the sheer nonsense of all this is a mirror of how they will not condemn the violence directly caused by BLM yet froth excitedly over supposed ‘terrorism’ at the US Capitol on January 6th. 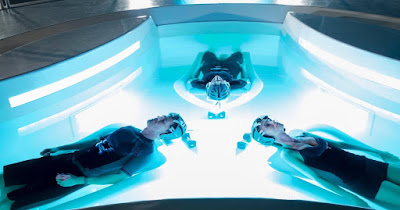 How much further can the left fall before they finally see their reflections staring soullessly back up at them from the void they are creating? How many times can you excuse an action on your side while condemning a much less intense version from the other side? How can they rally support for physical intimidation of Conservative figures, yet be enraged, offended and wounded by merely hearing their voices? Hypocrisy used to be a criticism... I think they now take it as a badge of honour.

The left dominate media, the world of entertainment and, increasingly, the world of sport. But not at the grass roots level they imagine. People who would once have unquestioningly voted for left-wing parties must now be embarrassed to be associated with them and their ridiculous crusades and feel uneasy at the clamorous readiness to cancel voices yet to be heard. So we await GB News with anticipation, and if Andrew Neil can cause the explosion of a few lefty heads, then all the better.