The dash to go Green (capital G) as espoused by Biden and now most significant leaders is being fuelled by those who can profit from it.... and there is no profit in encouraging individual green actions such as reducing one’s energy needs. If the objective really is to save the planet, then using fewer of the planet’s resources and seeking to use ever less energy is the way. But that is no recipe for money-hungry exploiters of faddish thinking.

Wear an extra layer, beef up your thermal insulation at home, work from home or live nearer to work to reduce transport emissions, drive economically, reduce the number of shopping trips by more careful planning. We could all of us, every one, reduce our overall consumption of bought energy and hence carbon emissions by, I imagine, around ten per-cent. But that just isn’t sexy.

In contrast the industrialisation of ‘green solutions’ is a rapacious endeavour, consuming more resources in the short term – extraction, transport, manufacture, transport, implementation, transport and maintenance… which will involve transport. And all that has to be paid for in both financial, environmental and human terms; money spent by governments to line the coffers of the Big Green Machine isn’t being spent elsewhere, where it could arguably do more immediate good.

To take just one example of the absurdity of trying to move so quickly, the suppose electric car revolution will demand ever more electricity generated from fossil fuel sources because renewable generation is simply not reliable enough. The UK National Grid has estimated a doubling of generation demand in the next ten years, but optimistically places faith in the twin miracles of wind and light to provide this.

The big, national conversation has not been had. Despite tsunamis of environmental programming – green this, green that, everywhere you tune in – it is almost all polemic. Persuasive talking heads telling us all to follow where they lead. But whenever I personally try to get to the truth I discover wildly optimistic evangelists, wide-eyed with wonder. Or else I stumble upon cynical climate deniers and anti-Green movements. I just want the truth; this is supposedly science, so why is the truth so hard to find?

It depends, of course, on what kind of truth we want to hear. The obfuscating truth that expects you to sign up on the basis of woolly sentiment or the fuzzy logic of ideologues? The warped truths presented by extremes on either side of the green divide? The partial truth which paints a shiny, beautifully crafted icon, just so long as you don’t pull focus and see the chaos in the background? Or the downright untruths dressed as virtue or shame which are used to alternately entice or punish us into compliance?

I see no sinister hand of conspiracy, but I do see why so many observers imagine collusion between government and business. And it isn’t so hard to see a causal chain. Politicians are not well paid in the scheme of things, so politics simply does not attract brilliant minds and the days of honest service of one’s country are, for the most part, in the past. So national leaders must surround themselves with others who are similarly limited in intellect and depth of knowledge. They need to get their push to action from somewhere.

Protesters are no source of action, so disunified and shambolic are their demands. And this is usually the only thing protesters always come armed with; demand, without concrete solutions. A business, however, which can profit mightily from the construction of windfarms, will spend a fortune on creating an argument which then becomes pervasive as it is spread across society. Flood the airwaves with that message and suddenly it appears to come from the people. What would you, as the Minister of Decisions, do? 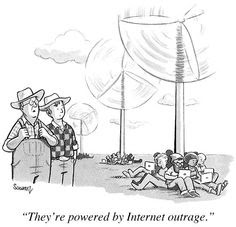 I have always been an advocate of the principle that if we want to see change we have to be the change, that charity begins at home and that if you look after the pennies the pounds will look after themselves. In short, don’t look to politics or big business to bring about your green revolution, look to yourselves. Ask not how the country can spend all your money but how you can keep more of it for yourselves! Make it a quiet revolution; it will drive them crazy!

Email ThisBlogThis!Share to TwitterShare to FacebookShare to Pinterest
Labels: green revolution, self-help in the ecology wars