We Need to Talk About Democracy

We all think we know what a democracy is, don’t we? Growing up, the common retort to somebody poking their nose into your business was “It’s a free country!” and we all instinctively knew what we meant. Had we been asked to expand on our assertion we would no doubt have deployed the D word as ultimate proof that as long as we weren’t hurting anybody else we could do or say pretty much what we liked. That’s democracy, we assured ourselves.

Turns out that’s more like anarchy, although until the Sex Pistols came along with their half-baked take on the national character few had any notion of what anarchy really meant. But as the years rolled by we began to invoke democracy more and more whenever we wished to justify a life of peaceful hedonism, bankrolled by the ambitious pursuit of gainful employment. It’s a free country… democracy, innit?

It turns out that despite what we might think we know, democracy doesn’t work the way we always assumed it did. For a start, the popular definition of democracy – governance according to the wishes of the majority – is only one possible interpretation. And these days that version is called ‘populism’ and derided as a far right, mob rule irrelevance. And given that ‘the far right’ is now everybody who voted for Brexit and Boris, this type of democracy is now a horrible distortion of the original intention.

No, no; what we have is ‘representative democracy’, which is little removed from an autocracy – governance by a single person who holds all the power – when all the representatives seek election via a supposed democratic process of one man, one vote, only to then conform to a hive mentality in office. The whole of the western world appears to have a political class which is broadly in agreement with itself, and broadly out of synch with its electorate.

It’s a good trick if you can pull it off and they have been doing it for years. Telling themselves that letting the population at large make important decisions about which they understand little, the elected representatives (who themselves barely know more) make decisions guided by a political staff class who appear to overwhelmingly hold one set of values. We see it in the broadcast media, the civil service, the education system and even in the lawyers. We are actually governed by bureaucracy, while the bureaucrats themselves claim to be mere functionaries.

But if they are simply the pen pushers, who pulls their strings? There has long been plenty of evidence for a form of plutocracy, whereby the real power lies with those who have all the money. But ask yourself this; if you already have all the money the existing system obviously works in your favour, so why would you risk upsetting the apple cart by taking control? Nope, I don’t buy the New World Order theories at all; people who are that successful are often incapable of the kind of cooperation that would require. Competitive, suspicious, prone to paranoia; I think they would quickly fall out and break any such consensus. 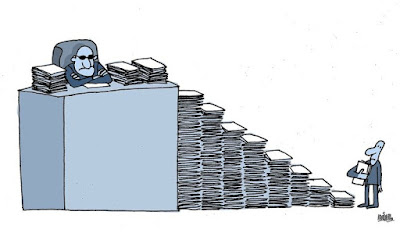 All of which leads me back to the same conclusions I’ve been arriving at every time I look at this. For all the good intention to govern by common consent the best system we can devise is one in which nearly everybody is regularly disappointed. But just as with any set of rules, some can find a way to turn them to their advantage. In an atmosphere of mutual suspicion, when governance is more by trial and error, there is one group who rarely suffer, no matter how incompetent or venal they are; we call this group 'politicians'. Democracy? No. If anything, we are governed by a Mediocracy.