Believe it or not

If 2020 was the year of the conspiracy theory it was little different from most years, apart from the perfect storm of Brexit, Trump and ma-ma-ma-MY-Corona! But there is nothing new under the sun, so although lots of locked down idle hands embarked on dot-joining fantasies of the highest order, all they really did was take a few of the old myths and use them to create a Hollywood-style remake of the classics.

Examine the claims and watch a few of the YouTubes, read a selection of blog posts and immerse yourself in the gloriously crazy world of what are now referred to as memes and you will see all the old favourites there: Chemtrails, 9/11, Elders of Zion, the Coudenhove-Kalergi plan, Agenda21, the Barcelona Declaration, Paris, The Great Reset, the 5G conspiracy, critical race theory, flat earthers, Q-anon… and of course Covid (and many, many more).

There is a book called Plotto, by William Wallace Cook, originally published in 1928, which purports to contain the basics of every narrative structure you will need for your novel, play, or movie. It is a starting point for struggling fiction writers, bringing together characters and situations from which you can weave your literary masterpiece. It has oft been said that 1984 was a warning, not an instruction manual, because you can read in that 70-year old book, astonishing parallels with what is happening today.

But, guess what, you could easily apply much of Orwell’s dark ‘prophecies’ in reverse to events which happened millennia ago. The Greek myths are filled with portents of doom, with mankind being manipulated by playful, fickle and sometimes evil gods. The only difference today are that the gods are no longer called Zeus, Apollo, Poseidon and Athena, but Bezos, Soros, Gates and Zuckerberg. Wait a minute; that last one – you don’t think he’s… Jewish, maybe? (See how easy this is?)

It would seem on the surface that it takes a great deal of denial of reality, of unquestioning credulity and an enormous effort to maintain the complex narrative of your typical convoluted conspiracy theory. That, in contrast, the simplicity of applying Occam’s Razor would seem so easy that almost nobody could be fooled into falling down the rabbit holes. But there must be something deep in the unconscious that prefers complexity to truth, that prefers a plotto to notto. And when you see this it all suddenly makes sense.

The Norse gods, the Egyptian idols, the fabulous manimals of Indian theology, the dreaming of Australia’s aboriginal people. Everywhere you look in history, from the original creation myths to the highly structured rituals of birth and death and the control hierarchies of the Catholic church, you can see the basics of every modern conspiracy myth. When Jack Nicholson’s Colonel Jessup shouted “You can’t handle the truth!” he was shouting at all of us. 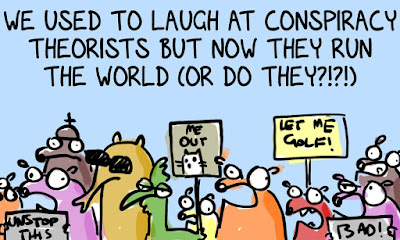 In our world nobody got fired just for being bad at their job, nobody got sick by sheer coincidence and no election was won simply by one side getting more actual votes than the other. We crave complexity; there has to be something more and, to be fair, life seems somehow more vibrant, more edgy, if behind every sleepy community some overlord pulls all the strings. Will 2021 be the year we wake from our own Dream Time, taste the fruit of the tree of knowledge and realise that what we've got is just what we see? I somehow doubt it.