In a poll of people who enjoy the attention of being regularly polled, 78% of those who just love to be consulted think that polls provide accurate insights into important matters of the day, regardless of the sample size, cohort demographic and quality of the questions, just so long as the exercise produces the right answer. There is a debate to be had as to what constitutes ‘the right answer’ but without drilling down deeply into the data it can be assumed to be whatever it was the poll set out to find in the first place.

So, following several decades in which the BBC’s popularity and relevance to the general population’s values, hopes and fears has suffered progressive decline it has come as no surprise that the latest poll finds no better than 50% satisfaction with the corporation’s offerings. When I say it comes as no surprise, I include Aunty herself, an organisation which is regularly slated for its soft, woke, lefty stance on everything by… well by about half the population.

What then, is the point of polling when the result is exactly what was expected? And given that any poll which doesn’t match your expectation is automatically derided as rigged, fake, or taken at at the wrong time or place by the ‘wrong’ people, why even bother at all? What is the point, why are there so many polls, and what do they bring to the nations’ health, well-being or prosperity?

There is such a thing as push-polling, where the published outcomes are intended to coerce the masses into believing a thing they don’t believe. You know all about them; Britain is institutionally racist, the EU was the only thing that prevented war in Europe, employees say that diversity is more important than competence, that sort of thing. Companies use polls to sell their products, governments to sell their policies. You can’t fucking breathe for polls, ever minute of every day of your choose-an-option life.

But does any of it improve anything? Given that the automatic reaction of most people to pollsters, in person, online, or on the phone is to shun them, the outcome of polling may be heavily influenced by those who have nothing better to do with their time. It could be just that some people actually feel important if they are asked their views, but should we listen to what such people think?

An entire sector of our economy is based on information, regardless of how accurate that information is, and right now accurate information could be literally life-saving. But the polling trade has never been concerned with accuracy. How much opinion, both lay and professional, is shaped by inaccurate polling - doubtful outputs shaped by dodgy inputs, results pre-ordained by political and other biases – and how many poor decisions have been made because of them? 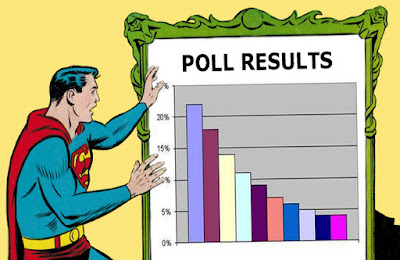 It is little wonder we don’t trust experts even when we lack the ability to make our own minds up, especially given that polls pull us one way then push us another. What I would really welcome is a proper investigation into this entire field; to what extent are polling activities impacting negatively on productivity, mental stability, national unity and harmony, etc? Because if, as I strongly suspect, polling is a big part of ‘the problem’ then the sooner it is exposed the better. Who’s with me?

Email ThisBlogThis!Share to TwitterShare to FacebookShare to Pinterest
Labels: polling