Let me state, once again and for the record, I think Donald Trump is an idiot. But ‘evil’, seriously? A traitor; on what basis? The actual devil? Do me a favour; even for gullible god-brothers that is just childish. The hyperbole of antipathetic commentators is bordering on hysterical. In fact, strike that, it is hysterical. Some of the statements coming out of the House of Representatives would shame a teenage wannabe horror writer searching for the language to shock. The obvious hypocrisy can most readily be seen in the descriptions from these same commentators, of the BLM shittery last summer. ‘Mostly peaceful’ said the on-the-spot reporter to the background of burning cars, wrecked businesses and running battles on streets across the USA.

But this is how language has deteriorated in the Internet age. In the search for ever more reach the headline writers have become mainstream ‘journalists’. 'Phew, what a scorcher' just wouldn’t attract the clicks today. The next heatwave would have to be some idiocy such as: 'Searing tongues of flame straight from the jaws of hell itself burns millions alive! Devil to give evidence at Senate hearing'. Or some such bollocks; because it is all bollocks, isn’t it?

In my day job I deal with physics, of a specific variety, and of course physics is pretty much tied to observable repeatable phenomena and dare I say it, facts. But I frequently discover how little I actually know about these long-established realities. I know what I need to know, but how deep does my knowledge go? Often I discover my real understanding barely scratches the surface. And this is stuff I study and teach and often research from a wide variety of sources which 100% agree on those actualities.

So where do I stand on coming to an opinion on subjects about which I have no first-hand knowledge; things I only hear or read after they have been filtered through the febrile minds of partisans? Left and right in politics; pro or anti masks and vaccinations, meddling child or working class hero Rashford, etc... Every day there seem to be new campaigns to get behind, situations about which you are positively urged to take a position. But how are some people so solidly on one side of the fence when only a part of the scenario is revealed?

Confirmation bias is so strong that it often affects people whose very existence is founded on a search for truth. The moral philosophers who really ought to be able to consider things in the round are invariably of one single mind and pursue that track relentlessly. And the rest of us look to all kinds of unproven, untested demagogues to tell us what to think. My mate’s an expert; I have a friend who is a nurse and she says... ; the science is settled (it rarely ever is); the Bible tells us… And the most flippant of all: “everybody knows”.

They say a little bit of knowledge is a dangerous thing and I am as guilty as anybody of proving that truism. But I do try and I do, sometimes, change my mind. Clearly, then, I must be a dangerous far right troll, believing, as I do, that nobody should suffer, but all have responsibility for their actions. How is it possible that I can see some of the good in both socialism and capitalism? What kind of a monster am I? Why won’t I just behave like the fash I so clearly am?

Certainty is a dangerous illusion, but so certain are some people in positions of power and influence that they believe they get to decide when free speech becomes hate speech. The flag-waving cheerleaders for direct action against the state throughout last summer have decided that when the other side takes a stand it is repugnant. Who gets to decide what is and isn’t insurrection? If beauty is in the eye of the beholder, where is hatred perceived? 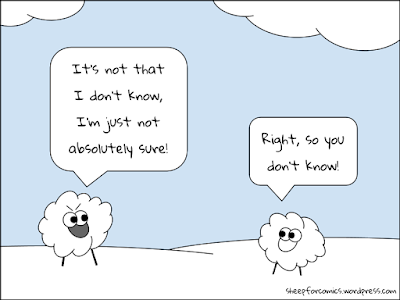 I haven’t penned a blog for a while, partly because I have been swamped at work, but also because I haven’t had the will. Some days I feel I am drowning in a sea of idiots, taking at face value all that they are told. This is something children do, but don’t we tell children not to blindly believe what others tell them? Don’t we tell them not to just copy the bigger boys? Do we no longer teach them to think for themselves? Maybe it’s time we started.

Email ThisBlogThis!Share to TwitterShare to FacebookShare to Pinterest
Labels: are you sure?, certainty, the danger of certainty