When I started this blog, way back in, er… oh, it doesn’t matter, I thought my intention was to put the world to rights. Hence the self-aggrandising title. It all started off as intended but I quickly strayed from my original thesis and began commenting on matters about which I admittedly knew little, yet still had opinions. Over the years I think I have become more open to challenge, but less tolerant of those who cleave to what I consider superstitions, folklore or the blind following of memetic themes.

Some of my earlier efforts – and they are all there, untouched, archived – involved fanciful parodies and reductio ad absurdum skits on the lines of you-couldn’t-make-this-up-but-imagine-if-you-did… Taking a ridiculous notion a stage too far used to be an easy way of getting a laugh, raising an eyebrow or further infuriating the perpetually offended. But now? Now it is almost impossible to tell what is fact and what is fiction.

Donald Trump popularised and possibly weaponised the upsurge of fake news (or as he pronounced it, to a British ear, ‘fake doos’) but he certainly did not originate it. When a story emerges showing your side in a bad light the drill is now to immediately dismiss it as an outright fake, an exaggeration, a misreading of the facts, or simply unproveable. And then you counter with some equally unsubstantiable trash talk of our own.

Or you downplay events. You lied to a select committee? So what, everybody lies, select committee panel members lie. Keith Vaz chaired one, for heaven’s sake, so how can a select committee hold somebody up to standards they can’t meet themselves? The focus switches to digging up the past misdemeanours of the select committee which is then, itself discredited and the original charge gets buried. Politicians and public figures are repeatedly let off from indiscretions and improprieties which would get most of us sacked. (Dare I even mention Max Moseley?)

So, I have long since lost become immune to gaping, wide-eyed, at the bizarre proclamations of academics. From a position of unimpeachable integrity, the world of higher education has fallen to the status of mildly amusing freak show, without a shred of credibility. Even so, the latest drama-crisis from the University of York absolutely beggars belief. They have decreed that the three wise monkeys are racist. And they say this because of something you or I would be excoriated for saying.

When I hear about calls to stop using words like ‘blacklist’ or phrase such as ‘black arts’ even my sub Neanderthal brain can understand where they are coming from. Associating bad things with words which are also used to describe certain ethnicities can bring about some negative correlations. I see that. But deciding that the depiction of monkeys – wise monkeys, who advise us against intemperate actions – is tantamount to depicting those ethnicities as simian. Isn’t that… racist? One would have thought that academics would be able to think at least a layer deeper than that. 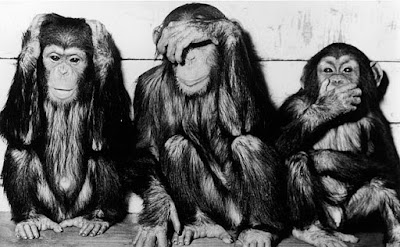 But hey, that brings me right back to one of my regular trains of thought; we are none of us as clever as we think we are. Few of us possess the self-awareness to both examine our inner souls and DIY a bit of improvement. And this effort by the Dudes of York shows that a shallow attempt to appear woke simply uncovers a deep inability to deploy simple common sense. It strikes me that this was a topic to leave well alone. In fact, the ideal aphorism of reflection here is; see no evil, hear no evil, speak no evil. Hoist, I’d say.

Email ThisBlogThis!Share to TwitterShare to FacebookShare to Pinterest
Labels: see no evil hear no evil speak no evil, the three wise monkeys