And so, it begins. Biden is issuing executive orders on racial equality, left, right and Chelsea, in the fervid hope that playing the race game will gain him his legacy. This is an already forgotten president who has learned nothing whatsoever from the last four years, or, indeed, his last 47 years in Washington. Trump was necessary and in many instincts was dead right, but the left of western politics was never going to give him a chance, sticking the knife in and twisting it over and over again, instead of listening.

One thing Trump was dead right about was that the swamp needed – and still needs – draining. Another was his clear love for his country, however clumsily he expressed it at times, and the need for all Americans to share that love and join in a common endeavour to heal the rifts. He saw, even though his intellect and oratory was unable to analyse or disseminate it, that the politics of race division would never solve the massive societal problems throughout the disunited states. And his supporters followed him because they saw a faint glimmer of swamp gas leading the way.

Trump isn’t coming back; he will find no support where it matters and although the frantic and frankly hysterical show trial of a second impeachment hearing is merely an act of impotent revenge, it will deny him future funding. So that fox has been shot, but Biden has fish to fry for which he has no skillet anywhere near big enough, nor competent chefs to oversee the process. He is taking his advice – and this is in plain view – from the very people who foment the unrest in the first place.

There was a time when the USA would not negotiate with terrorists, but now they are openly invited to the White House to discuss the supper menu. And throughout the once civilised world the subject of the big carve up is poor white men. White supremacy? Tell that to the unemployed of the rust belt and dust bowls who just want a chance. Black oppression? Tell that to the neighbourhoods terrorised by the rioting and looting and direct threats to life.

Emboldening organisations like Black Lives Matter and their many hangers on will only perpetuate the imagined oppression and with every inch of ground gained they will demand more. In the UK, the Liberal Democrat MP, Wera Hobhouse tabled an early day motion on, of all things ‘hair discrimination’. Give me strength...

Where does this end? It is pretty clear that in the race to ‘level up’, which is an impossible feat to achieve, the left will always begin by hobbling those with perceived advantages. When your passport to a better life is to identify as a victim, the disadvantage is conferred to those who have already suffered at the hands of anti-discrimination legislation. It’s fun being labelled as a Nazi just for striving for success and paying more taxes, isn’t it? 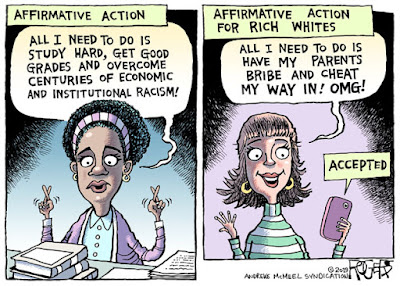 The persistent lies which obscure the inconvenient truths.
The left will never challenge this perception.

The soft bigotry of low expectations  is an overused phrase, but it haunts every move the left makes. When you demand special considerations for every group except whites you reveal yourself as nothing other than an anti-white racist. Or, as in Biden’s case (his nest being already well feathered, thank you very much) a useful idiot for that cause. So, no, his presidency will not be marked by peace and harmony and loving equality, but by the furtherance of resentment and exclusion. Just wait and see.