2020 was the year in which you discovered how little you knew people from whom you might previously have sought counsel. It was a year of conflict, aggressive at times, and a year in which many revealed the reason why communism and fascism and religion has ensnared millions via the medium of repeating obvious lies until they become self-evident truths. And I have never known such a relentless onslaught of lies as waged by the Black Lives Matter ‘movement’ and its willing white slaves.

Eminent institutions which have never taken a political stance suddenly discovered slaver skeletons in their closets and prostrated themselves at the feet of the black militias. One influencer after another vied with each other to see who could abase themselves the most in a competition to signal their deep shame at having the wrong colour skin. The only lasting effect, however, will be to ingrain a deeper sense of mistrust of each other, a situation which will most deeply and negatively affect those it pretends to champion.

But another source of mistrust has overwhelmed the national discourse for three-quarters of this year and at least another quarter of the year to come. Ordinarily, people clamour for their governments to protect their health, but this particular pandemic has been seized upon by peddlers of the most outlandish portents of doom. Piecing together the parts of different jigsaws, some of them hundreds of years old, they have terrified people into believing they are to become the robotic slaves of an evil empire.

The disjointed logic of the Great Reset theorists and Covid-deniers is never doubted by the eager acolytes of global conspiracists, even when the stark contrasts of fact and fantasy are laid bare. Every effort of reason to allay fears is glibly subsumed into the evil plot – that’s just what they want you to think! It’s hard enough to keep a surprise party secret, let alone a half-century old plan to turn human beings into batteries for the matrix. Good grief, some of these people are going to need serious long-term care after the apocalypse fails to materialise.

It is impossible to summarise in one place all the threads that have been woven together in a dot-joining exercise worthy of Bletchley Park, or the decoding of the Rosetta Stone, but my god, it’s as if each conspiracy sect is determined to outdo all the others – and no side trusts any other side… with anything. For a species which relies so heavily on cooperation to achieve great things this is a major blow to our credibility. I only hope the aliens will still want to probe us after it’s all died down.

And talking of dying down, one would imagine that the opponents of Brexit, in the face of all the hostility shown towards the UK during the final countdown to our independence (and I still find it hard to believe that they don’t grasp the importance of self-determination) would finally be accepting reality. But no, they’ll have none of it. Here we are on the actual final day of Brexit and some of them are still refusing to accept their multiple losses and be gracious in defeat. Mistrust between Remain and Leave will last a generation. 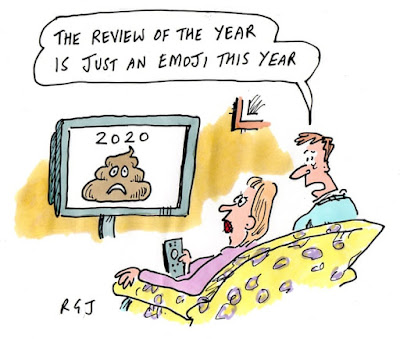 So what great truth did 2020 reveal to us? That we can all pull together in a crisis to find a way through? That we can put aside our differences to find common cause? That the character of a person is more important than the colour of their skin? That the much admired Blitz Spirit is alive and well and living in London? Not a bit of it. If 2020 is going to be remembered for anything it will be the year when the ugly truth of humanity prevailed over the myths of our compassion, ingenuity and godlike omnipotence.

We all want our heads banging together. Here’s hoping for a better 2021 in every way.

Email ThisBlogThis!Share to TwitterShare to FacebookShare to Pinterest
Labels: Happy 2021