The Yanks – well some of them – do like to fawn over a Sir, or a Dame, a Duchess, or a Lord. Despite being decoupled from the British honours system for two and a half centuries and, as a republic, being avowedly anti-monarchy, a title conferred by royalty nevertheless holds a certain cachet. The Oscars ceremony alone attracts knights of their former realm like wasps round a jam sandwich and which hostess doesn’t glow when introducing a Sir of stage and screen at an exclusive gathering?

But that is them. Over here, where all the ermine is bestowed and the honours dubbed by Her Maj herself, or her direct delegates the honours system has become a joke of long standing. Fifty years ago, we scoffed as knighthoods were handed out like confetti in the New Year’s list; why, we would ask, would you confer what was once a recognition for a lifetime of fealty and honourable service to a kid who kicked a football, or a hoofer from the stage?

People who have earned great fame and wealth through their talents and good fortune could maybe earn such a slap on the back had they spent a great deal of their personal fortune and dedicated much of their life to helping others. But bitching about how hard it was making it in Formula One because you were black, when nobody had even noticed save for yourself, hardly qualifies. Does it, Lewis?

Similarly, using a public platform to pressure the government you don’t like into doing what your own preferred flavour of government had never even considered should be no basis for such an honour. Yes, an act of bravery in saving the monarch’s life in the face of grave danger, or giving your life in battle, defending the realm, would justify recognition for one so young. But kicking a football, having been generously sponsored from the age of 8 doesn’t come close to the test most people would deem appropriate, does it Marcus?

Treading the boards for half a century, supporting charities, generously giving of your personal time to carry out good deeds? Yes, absolutely. On retirement after a lifetime serving the royal household without ever giving an interview to the prying press? Why not. Honourably and honestly representing the country as an ambassador over several decades? Seems fair enough. Beginning as an infantryman and rising through the ranks to command a branch of the armed forces? Well, of course.

But many honours are conveyed through nothing other than cronyism. The House of Lords is stuffed by every serving Prime Minister with people who know where the bodies are buried. Minor celebrities whose entire oeuvre amounts to a couple of sitcoms and the regular turning up to the opening of envelopes are recognised, but lifelong philanthropists are side-lined. And far too many complete, impotent nonentities manage to get blinged up; dare I mention Adonis, here?

With all of this in mind it has been a source of considerable pleasure to note that the scheming, lying dirtbag Blair has been (aptly) honour free since he left office as Prime Minister in 2007. The rumour has always been that The Queen herself did not give her consent, but now an inside source is suggesting she will have to relent, in order that subsequent Prime Ministers and others can receive honours they may, or may not truly deserve. 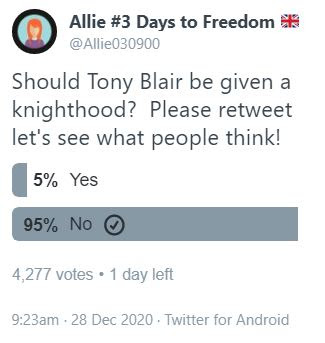 But why? Why can she not simply pass him over and honour the others as she sees fit? She is Her Majesty, The Queen, after all. And if Blair really is blocking the conferring of knighthoods on others, who might some of these others be? Maybe it is time to democratise the honours system, perhaps by way of Twitter polls. If the example shown above, along with the inventive comments which accompanied it, is indicative, Blair may be waiting some time. And if he does eventually get to take the knee, please let it be a discredited worm like Harry who does the honours.