It’s happening. They are doing it all over again. Remoaners everywhere are still, it seems, telling themselves that Brexit can be stopped, time be turned back and we can all get return to being happy Europeans again. They are lying to themselves that we were comfortable in the creamy bosom of the über Frau and that but for the EU we would not have enjoyed an entire millennium of blissful peace, as if the EU began with Hastings.

Remember, they say, when we were a force in the world? Remember the happy shining faces of the children as they skipped from kindergarten to baccalaureate to Erasmus exchange scholarship where they met their future wives and raised gurgling multilingual children in their Tuscan villas, their Spanish haciendas, their pieds-à-terre, their gîtes and their idyllic Black Sea dachas. How glorious that flag and how awe-filled their minds and that of their droogs when listening to the stirring strains of good old Ludwig Van.

While these heroic upper-middle class New Europeans dandled their Eurobébés on their pan-European knees they would look out over the glistening waters of Lake Europond and recall how their ancestors had built this unified paean to peace and harmony and glorious multiculturalism, against the opposition of angry, gammony Little Englanders and their odious Mr Hitler.  How grateful those uncivilised dogs were that the most famous European of all, a Frenchman named Churchill, had intervened to save them, yet again.

The Eurocrats lived high on the hog as, unseen, the low-skilled human robots happily carried out all the ‘Manuel’ labour, licked the streets clean and served up glorious international cuisine for them to consume in their bistros and bodegas and chi-chi cafés, as they chattered in a glorious Babel of harmonious diversity. Such food was unheard of in the cold, damp island of Great Britain, whose inhabitants had never left their shores and were unable to see beyond the fog banks which forever hovered just outside Dover.

Oh glorious past, they mourn, when all things were possible and all dreams within reach; when they didn’t need troublesome episodes like democracy and elections because their betters ruled – and ruled wisely - by divine right. Under that beautiful starry emblem in a beautiful blue satin sky they had their own, highly regulated (and therefore indisputably correct) customs, their own official, internationally recognised language (English) and everybody knew everybody else. It was a privilege for people to say they had become European. 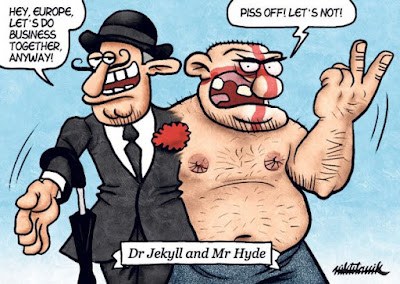 How Remainers and Leavers alike view it...

The folklore they tell themselves, the misty memories they share, as they look back on a thousand-year Euro-Reich that never existed. Pity the poor Little Strasburgers, imagining they ever wielded power and influence over large swathes of the world. But sadly the days of the EU empire are gone, never to be seen again and now, finally, they must face up to the lies, the chicanery, the false prophets of doom and the fact they didn’t know what they were voting for.

Email ThisBlogThis!Share to TwitterShare to FacebookShare to Pinterest
Labels: Brexit deals, deadlines missed, farewell to all that