Tis the season to be generous

I have to say I am disappointed, but not surprised that people are making such a fuss over the Christmas precautions. Yes, there are families for whom this will be the absolute last Yuletide for some elders, but most individual households are not in this position. In any situation there will be exceptions deserving of more sensitive treatment, but surely people who have spent their year engaged in avoiding exposure to the virus cannot seriously have been planning Christmas as usual?

Is it really true that the majority of Britons cannot scale down their festive plans for this very abnormal time? The vox pops sound like the same people who railed against the foreign travel restrictions, as if they couldn’t just hold off until next year. I wonder how people who can’t afford holidays and have spent the last 20 Christmases alone must think. Because, although selfishness is a very human trait, it is also widely regarded as a weakness.

Human weakness is manna to the marketing industry; buy this because he’s got one; do you want to be the only one who hasn’t got this? Surely children are still taught the virtues of abstinence, and if not, why not? For my generation thrift was integral to managing expectations; save for a rainy day, look after the pennies and the pounds will look after themselves; don’t want what you can’t have. Are these simple, honest principles really beyond the ken of today’s people

Christmas is the very epitome of shallow, frivolous consumption and has been for many years; locked down in the middle of winter it was a welcome blowout as the nights began to slowly recede. As a child we put up decorations on Christmas Eve and took them down less than a fortnight later. Yes, for weeks beforehand there was excitement and anticipation, but it was contained. Those putting up lights in November were scorned, but come the twelve days peace and goodwill reigned, too much rich food was scoffed then, afterwards, life returned to parsimonious normality.

But these days Roy Wood’s dream has come true and for some people it really is as if it can be Christmas every day. Compared to 50 years ago, abundance is everywhere, thrift has been abandoned and although families do get together at this time of year, most people have the ability to do that whenever they wish, in ordinary years. You’ve still got the trees, the lights are up everywhere and almost everybody has access to Skype, Facetime, Zoom or any one of the dozens of apps that allow you safe face-to-face communication; you can still have Christmas, only smaller.

Just stop bitching about it and make the best of what you’re allowed. What, you made plans? People have their homes swept away in floods and mudslides. Lives are cancelled in the milliseconds it takes to reduce your car to a shredded mess on the hard shoulder. Shit happens. You don’t get to hug grandma? Boo hoo, you ignored her the rest of the year, you hypocrites. In the greater scheme of things what is one long weekend of indulgence that you could recreate at any time in the future when circumstances allow? 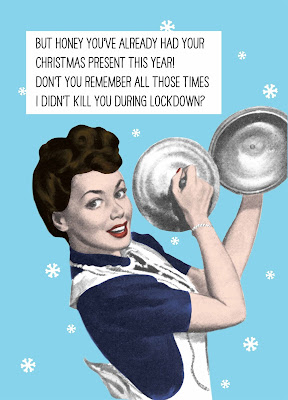 Look on the bright side!

You may not agree with the government’s attempts to tackle the crisis. You may not even believe there is a crisis, although you might want to discuss this with the bereaved. But isn’t this the time of year to pull together and work for the common good? I guarantee that the one thing the government really wants from Santa is for everything to go back to normal, and they will allow this as soon as possible. But that time is not yet here. Why would you want to be part of the problem? As the appeal slogan might have gone; This Christmas, whatever your personal misgivings, give the gift of life.

Email ThisBlogThis!Share to TwitterShare to FacebookShare to Pinterest
Labels: Christmas in lockdown