In this mini-series I claim to have no panacea, no road map of the way out of the mess we’re in; I merely suggest that if what we have doesn’t work – and for so many it clearly doesn’t – we need other ways. New ways. In short, we need to turn society off and then turn it back on again in the hope that factory settings are restored and the machine functions again. We need to disable the pointless apps hogging our processing capacity and get rid of the clutter so that we can access the important stuff.

The socialists are obsessed with pursuing every faddish minority distraction with vigour while ignoring the day-to-day realities of people who don’t need special attention or a new lexicon; they just need to be let back into participation into society. Not fashionable enough to warrant campaigns they fall off the social map and drift into debt, homelessness, drug addiction and crime and are then dealt with inadequately when they fall foul of the law.

But now it’s not just the ne’er-do-wells who are falling through society’s cracks, because many formerly self-reliant working people have been forced into penury during the lockdowns. The government has not really had much of a choice and I continue to believe – indeed, I have to believe – that they are doing ‘whatever it takes’ to protect the population from a clear and present danger. Who would want to take up the poisoned chalice of power right now?

And if this presents an opportunity to ‘build back better’, why should those words be interpreted as ‘build back worse’? Given the previous form of western governments you can be forgiven for being cynical, but think about it; what better starting point could we have, given that, in the view of a great many thinkers, society needed to be brought to its knees before it would listen? Forget about the fantasist Schwab and his futurology for fools. Who needs a great global reset when we can put on the show right here, kids!

It’s a big conversation, to be sure, and it will last for years, but right here, right now we need to consider where we start from. And I respectfully suggest that if we simply start talking over one another nothing will change. So let’s get everybody aboard the bus. First scoop up the desperate and regardless of how they got there, cover their debts, make them secure. In the grand scheme of things it would cost little to lift those burdens. Pay off the loan sharks and put the genuinely desperate back on an even keel.

Then let’s get people off the streets, fed and warm, and focus on what we need to do to bring these excluded people back into the fold. Because, the way we are now, the them and us divide has never looked so stark in my lifetime. We have allowed genuine underclasses to form and fester and let them know they are despised. I have been entirely guilty of thinking of them that way and I know it doesn’t work. We will probably need a vast army of care workers, social workers, outreach workers and the like, but we will have possibly millions of newly unemployed to draw on, and some will have hidden talents to connect.

Yes it will cost £billions, but what’s the alternative? Leaving the Covid crisis to find the denizens of the underworld have spilled out everywhere? Mass looting and violence as desperate people indulge in desperate acts? Private security installed to further separate and insulate only those who can afford it? In other words, South Africa; is that what we really want?

Despite the apparent charity, it’s not money for nothing. In return for dragging people back from the cellar up to the ground floor we need to demand they keep up their end of the bargain and perform as integral members of society. We need to go further than the mission priest exchanging a meal for an insecure attendance at a sermon. When the backsliding begins – and it inevitably will – we have to be ready to step in and prevent it. Come and re-join society and do it properly. 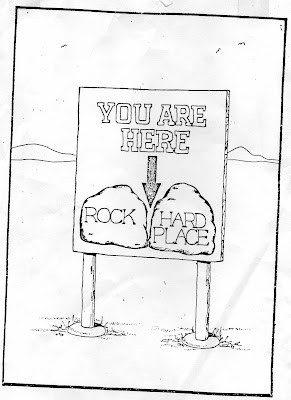 We’ve heard ‘all in this together’ far too many times for there to be much hope that this time it might happen. But we are all stakeholders now, and as the cynics’ cynic I harbour but faint hope it might actually work. But maybe it could, simply because of the sheer scale of the problem and the number of formerly immune who will suddenly experience a helplessness they have never felt before. If we don’t take what may be the only avenue of enlightenment open to us, who knows what alternative looms? How we pay for it isn’t the question we should be asking; that question is what are the costs of not paying for it?