The government has come to its senses. Not about Covid measures, not about Brexit negotiations, but regarding so-called “unconscious bias training". In a most welcome move UBT is to be scrapped for civil servants in England; ministers quite rightly say it does not work, giving it black marks all round. With this reversal of policy it is to be hoped that many other employers heed the call and ditch this needlessly divisive practice.

Naturally, supporters of UBT, or bleeding-heart race warriors, as they may more correctly be called, are moaning on about how this is ‘throwing the baby out with the bathwater’ and blaming a failure to inculcate full white guilt in every workplace in the land as a backward step. They say that the total lack of evidence that every white Briton is a dyed-in-the-wool racist does not prove that every white Briton isn’t a dyed-in-the-wool racist. The indoctrination must be stepped up if we are to uncover racism in every crack of the pavement, every nook, every cranny and yes, deep in your guilty white hearts.

The ‘training’, whose stated aim is to tackle patterns of discrimination and prejudice, is used in many workplaces, but the government says there is no evidence it changes attitudes. I say otherwise; along with hate groups like Black Lives Matter and Tell Mama, such movements actively do change attitudes… for the worse. Millwall fans were not booing an anti-racist gesture; they were booing a black power gesture. The deeply woke may be offended, but let’s be fair, when are they not?

No thank you I need no black-ops kind of enterprise to bring me back from the dark side. Am I afraid that unconscious bias training will make me ashamed of my skin, my language, my culture? My thoughts? Far from it, I am quite conscious of my biases and so what if I prefer to make my home among people who look more like me than otherwise? Am I aware that casual racism is in the very air I breathe? Who cares; I mean, play the white man here.

Black looks, black books, being blackballed… look on the bright side, the white side of life. Just because we notice that some are dusky, tinted, other-hued with a touch of the tar brush why would that be a cause for shame? The black/white ciphers for good and evil have been around long before the dark continent was even known about. Night and day, folks, night and day; why is that conclusion never arrived at? Well, because there is no money where there is no grievance. 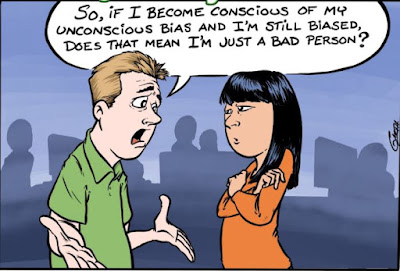 But I’ll do my bit for the black economy, which is pretty white of me, I know. Oh yes, I will keep on being most consciously biased and thus provide plenty of opportunities for whole new offshoots of the black misery industry to thrive. Misery does love company after all, so it would be selfish of me to simply surrender to the woke agenda and give them nothing to complain about. And of course, while they’re marching at least they’re not looting. Unconscious? Not in the slightest.