It’s the Americans who declare they have government of the people, for the people, by the people, but increasingly they are realising they have no such thing. And just as we never had the equivalent of the Gettysburg Address, neither have we ever, really, had any such form of government. We have, instead, a government and an opposition, loosely formed around class divides, with neither side truly representative of the people they supposedly, er, represent.

To the notional right we have the Conservative and Unionist Party, originally comprised of landowners and wealthy potentates but now, increasingly recruiting from the lower orders. Yes, Eton old boys are still prominent but once upon a time that alma mater would have been a given. The main thing people hate about The Tories is the belief that the patronage from rich donors means they are always and only on the side of the elite.

At least, that is the relentlessly lazy attack line from the other side. Labour, from its inception took the side of the working man, but its parliamentary party is now overwhelmingly comprised of Oxford PPE graduates, former hardened trades unionists, and various other adherents to dogged Marxist dogma. With the exception, possibly, of wanting ownership of the means of production, Labour appears to have no firm principles. Instead it insists on fragmenting along numerous identity-based fault lines.

And that’s it; that’s your choice; those are your only options. Unless you think that tactically voting for the various unelectable minor parties – the Greens, Libdems, Monster Raving Loonies, etc – rather cleverly prevents one of the others winning a seat. Much was made of Ukip’s huge surge in the 2015 general election, taking 12.6% of the vote and winning precisely one seat. Proportional Representation, they claimed, would have meant some 70+ seats and a place at the table.

But it wouldn’t be an answer. It really wouldn’t. PR would mean that every election resulted in a grand shuffle of the fringe players, those who had got in on a surge in local popularity, or (more likely) partisan funding for nefarious purposes. A large part of the parliamentary seats would be held for single terms by inexperienced political players. That’s great, you might think; we’ve had enough of career politicians. And you’d have something of a point, except I’m pretty sure you’d opt for a career dentist rather than somebody who just fancied having a go.

No, I’m afraid we are stuck with a political class who love the game, who are steeped in playing parliamentary poker, unblinking through a haze of cigar smoke and constantly checking out the mirrors. The unprepared have no chance – as evinced by many of the gaffs of Labours child MPs like Zara Sultana and Nadia Whittome who regularly parade their callow naivety for all to jeer at. But were they not using the amplifier of their party for their tiny voices they would have no voice at all.

Under PR those who held seats relentlessly would form their own allegiances – I’d guess along Labour and Conservative lines – and the power would forever be held by them, as now. But the weird coalitions that we would have to endure between the start of the PR experiment and the eventually return to a form of uneasy vaguely-left/vaguely-right sanity would be a nightmare. Imagine two, or three parliamentary terms with no direction; it would be much like the European Union. 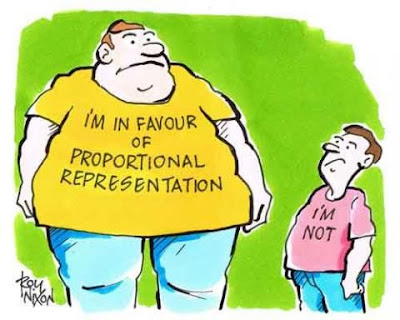 Oh, except the EU has no real democratic structure, all the power residing in the star chamber of a handful of individuals acting as a monolithic autocracy. When, in 2011, we did have a referendum on an alternative voting system it was overwhelmingly rejected by those who bothered to turn out; and only 42% of the electorate bothered anyway. My conclusion is: not only would PR be doomed to failure, it also, ironically, wouldn’t even be popular enough for people to vote for it. Meet the new bosses; same as the old bosses.