We’ve all seen the type of message – Facebook, Twitter, forums, etc – a stream of consciousness ramble which, while it possibly made perfect sense inside the author’s head, conveys no such clarity to the reader. Often the context makes the meaning clear but, rather more often, different people read different things. If the post is part of an argument, a lack of precision, poor grammar and misspellings do little to advance the debate.

The other day I posted a general tweet to the effect that sometimes I read things that are so poorly expressed – I particularly referred to spelling – that the meaning is not only unclear, it is not worth further effort to understand. I suggested it was better to ignore such word salads out of embarrassment for the originator. Sometimes, indeed, the use of words is so poor you know straight away it is not worth engaging.

I didn’t suggest one should point and laugh, nor indeed attempt to correct, merely to ignore, but right on cue came the accusations of being a grammar or spelling Nazi. And much like those piling in with the Covid conspiracy theories, the point was entirely missed. And missed by a mile. Better yet, given that I had specifically suggested ignoring such posts, I was instantly accused of overt judgment, despite cautioning the opposite. Some replies were quite judgmental.

When I suggested some months ago that I refused to entertain a firm opinion, either way, on the government’s handling of the pandemic, on account of not possessing the relevant facts or understanding, the Kovid Klan waded in to ‘educate’ me. “Only an idiot couldn’t see what was ‘really’ happening!” they informed me. “You must be a fucking Tory arse-licker!” they opined. Some of the posts were quite illiterate and many were self-contradictory.

The similarities between the responses to both positions were interesting. Those who had least comprehended what I was saying were most determined to impose a meaning I had not expressed. And those who felt – because they hadn’t read it properly – that I was attacking them, decided to lash out in return. It was highly illuminating, especially as I had accidentally missed out the second word in the tweet and almost all of them failed to notice.

In fact, of the very few who pointed it out to me, most were extremely polite and I, equally politely (I hope) acknowledge the irony. On balance I guess I got about one-third support and two-thirds opprobrium. But what was really telling, I thought, was that the criticism came mostly from the illiteratti. Interesting then, that those most in need of correction were most resistant to it. There is a something very human about all that. 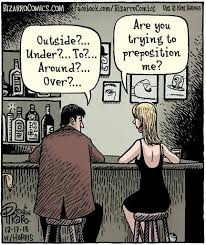 They probably won't get this!

As if to prove there point about grammar and speeling bean unimportant I had to wade threw quiet a few long and rambling. Replyes wich made no sence atall becos without at punctuation you don’t know if they no their shit or whether they’re full of it because you don’t need to spell thing write for there meening to be cleer so mister clever clogs its you and not me who needs to think before you write they might have bad childhoods and not their fault if they don’t know is it or do you think yore better than they… etc.

Of course, being the mild-mannered type that I am I wouldn’t know where to begin with such a response… So I just ignored them.