The precise words probably do not exist to describe the contempt in which I hold the oh-so-victimised Sussexes. But even though I am no keen follower of matters royale, it has been impossible to get through the last few days without hearing about the steaming pile of confected bullcrap masquerading as ‘revelations’ vouchsafed to Oprah Winfrey. The only thing left to marvel at is the continuing ability of so many people to believe so many egregious lies.

Lies? Yes, of course. Even if the liar believes it, the ‘big boys did and ran away’ excuse is only ever an occasion for derision. The deluded child, Markle, has imagined every possible way she could have been traumatised, probably by watching staged ‘interviews’ with the mistress of such pap, then regurgitating the same tired old psychobabble in front of said mistress. On reflection, steaming bullcrap probably gives it far too much credence.

Here is a woman who in order to garner attention, announced to the world that she was black. O-kaaaay, said the world, we’ll go along with it; what are you selling? Racism, she said. Woah, we replied, are you sure you want to go there? When somebody has to tell you she is ‘black’ because otherwise nobody would have noticed, you know there are issues. When she then uses it as a launching pad for her own victimhood story, well…

The phrase ‘mental health’ is bandied about so much today that it has become a part of every tragi-comedy in public life. Tragic because the casual (and incomplete) use of the phrase belittles everybody who genuinely suffers from poor mental health; comic because well, look at them. Poor me, is all it says. You don’t get to judge your mental state; you just live it. We get to judge, and in this case we judge you a fantasist.

There is a sickness in some people that they must feign genuine illness in order to garner attention. Some people have even taken to wheelchairs and sticks to play the part. Munchausen syndrome is a now common label for something that would have been unthinkable a couple of stoic generations ago. But physical illness is such a bore when one can claim to have a disease of the mind. It is the back pain of former years – an undiagnosable condition that nevertheless may need to be taken seriously.

The idiot Labour leader, Keir Starmer, yesterday declared that the accusations of racism throughout the royal establishment must be taken seriously. I would love to see him in a room explaining this to former Labour voters, members of the actual working class of all skin tones who could explain to him how fucking ridiculous he is. For today’s politicians, No bandwagon must be left un-leapt upon. In contrast Boris Johnson has effectively - and quite rightly - dismissed the whole affair as irrelevant. 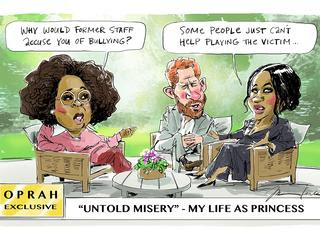 And Boris is right. While some American commentators fondly imagine the Amazing Ms Markle is single-handedly bringing down the British monarchy, the reality is that she is bringing down just one; her spineless idiot husband and father of her future meal ticket. There may be a way back into the bosom of the family for Harry when the party is over – nobody is giving long odds on this being a pairing for life – but he will be as popular as a cup of cold sick in the country at large. Good riddance.