Following 'that' interview, to turn on the television today, or to tune in the radio has been an exercise in ethnic cleansing. White commentators trying to scrub their skin black. Black commentators trying to rub out their very existence. If you are white today you are the new minority voice. Nothing you can say will – in the views of the wokeratti – atone for your sin; the sin of being born with pale skin in a society which privileges darker tones.

You are to blame and must make reparations for every imagined sin of your ancestors, even if your ancestors suffered privations every bit as harsh as Virginia plantation slaves. If you even dare to look at the black man the wrong way, the perceived slight may be actionable in law. Your own law, used against you. As you watch your culture being eroded in front of your eyes you might find your memories recalling happier days.

If AA Milne was writing Vespers today, the sentiment might be altogether less maudlin, less sickly sweet. I like to imagine it would have a more defiant ring to it: 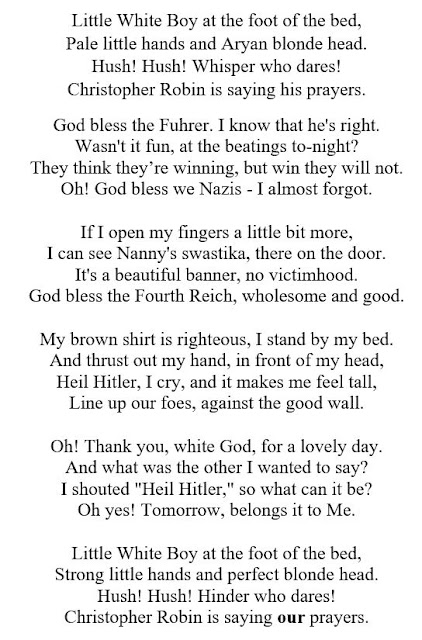 Be careful what you wish for, race baiters. The law of unintended consequences is rarely on the side of the aggressors. But if it's a war you really want, you'd best be prepared to fight to the death.