There really is no way to avoid the conclusion that the cost of ‘saving the planet’ is going to be too high a price for many to pay. For every renewable source of energy there is an enormous up-front investment required, often obscured from those of us, the consumers, who foot the bill regardless. I don’t think I have ever seen a reliable total figure for the erection of a wind turbine, for instance, and solar PV rarely returns what it costs on a smaller scale.

And when it comes to it, that’s really all there is, wind and solar. Biomass is a biomassive accounting scam, said to be carbon-neutral but actually incentivising a massive increase in carbon footprint. By shipping the raw material across oceans, from where it has often been grown in the devastation created by deforestation it amounts to environmental vandalism. But what about tidal power, you may counter? I am unaware of any working tidal generators of sufficient scale to contribute but a drop in the plastic-filled oceans.

As for carbon trading, this merely creates a market in soothing first world sensitivities by moving the unsightly out of sight. Offsetting emissions by paying landowners to plant trees rather than grazing livestock is mere smoke and mirrors, especially when thawing permafrost is said to be releasing trapped carbon at an alarming rate. Carbon trading is much like sending our plastic waste to Malaysia where they tip it into the sea; it simply moves the problem out of sight.

And what is to be made of yesterday’s announcement that subsidies for electric cars are being cut, from £3000 to £2500?  The fact that subsidies were required in the first place reflects the high price that early adopters were having to pay. The subsidy previously applied to cars up to £50k and now only applies up to £35k. And that is a reduction from a year ago when £3.5k was available for all electric cars without a limit to their cost.

That is already twice what I have ever paid for a car, including the odd occasion I bought new. But cutting it is an easy argument to make because anybody who can afford up to £100k for a car of whatever stripe doesn’t need a 3.5% bung as an incentive for their virtue signalling – they were going to parade both their affluence and their paid-for Green credentials in your face regardless. Green, it turns out, is for the few, not the many.

So, what of the developing world which is supposed to magically come into the twenty-first century without the several hundreds of years of societal evolution necessary to inculcate a culture of modernity (see most islamic countries for reference). We have been conducting such an experiment in the west, importing alien cultures in the name of diversity, under the happy delusion that we will all rub along together under western rules. It just doesn’t’ work, does it? 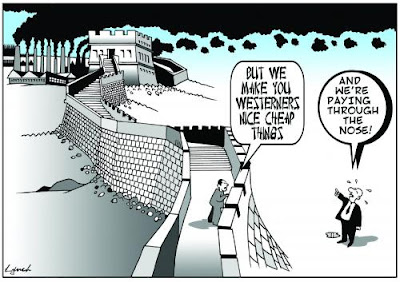 China, it appears, has the answer. It is going to fuel the Green Revolution with fossil fuel. Lovely, cheap, energy dense coal and oil and gas will keep the wheels of their manufacturing industries turning, achieving economies of scale only dreamed of in the west. Meanwhile the west will saddle itself with ever higher costs and ever tightening parsimony, eventually being forced to buy in its supposedly green technology from the inscrutable Orient. Damn clever, your Chinese.