You can’t switch on the telly, tune in the radio or click on a link today without being assailed by race. Colour colours every discussion, fuels every debate and informs every decision made by governments, corporations and media. In an effort to counter white bias – they tell themselves – it is necessary to inject as much non-white bias as possible, to the extent that every TV family is now mixed race, every voiceover is palpably non-native and every white commentator feels obliged to display his self-reviling inclinations.

And gathering pace in the UK, as it has been in the USA is the spread of fear over the rise of white supremacy. It is everywhere… yet where are they, these supreme white beings, these Klansmen, these insufferable racists? Where are the violent demonstrations for white power, where are the burning crosses, the assaults on mosques? Where are the lynch mobs and the strange fruit?

Because while I don’t see them and you don’t see them, according to the media they are everywhere. On the drive into work this morning, I listened to a World Service programme dedicated to the issue, and in the news a spate of killings of sex-workers in Atlanta by a self-confessed ‘sex addict’ (another made-up syndrome to excuse bad behaviour) was driving people insane because the motive had not been attributed to racism, as surely it must, given that these women were of an Asian background.

Black on black violence is just violence and it must be excused because these poor people have no alternative but to turn on each other, because, Whitey. Female genital mutilation, despite never being practised  by white nations, is Whitey’s fault, even as (in Kenya) some lawyers are arguing that the practice is a fundamental human right. Whites patronising black-owned business is a form of cultural appropriation, in a way that using electricity, transport, computers, etc, is somehow not. And don’t you dare talk about Pakistani muslim grooming gangs.

It all smacks of the old marital lament: “What’s hers is hers and what’s mine is ours.” This pick and choose approach to race relations is harmful, divisive and only ever goes in one direction. The soft bigotry of low expectations helpfully excuses every failing by individuals or entire communities to live by the codes of the host society; and the hard bigotry of critical race theory blames every failing on people who have little sense of any superiority.

In fact, if anything, it is white fear we should be addressing. It may be ignorant to blame your lack of a job on immigrants, but why has that perception been allowed to develop and what has, been done to counter it other than to pour on more blame a guilt? It may be true that white boys do poorly at school, but this never used to be the case, so what has happened in the last half a century to bring this about? And what kind of reaction do you expect when organisations like our national broadcaster openly announce that ‘whites need not apply’? 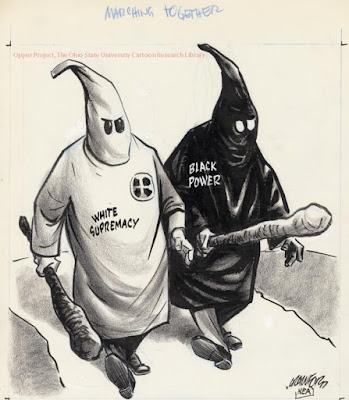 One of the fervid beliefs of the leaders of the Black Lives Matter movement is that of black supremacy. They preach the nobility of black skin, as if skin colour is the fundamental attribute to be judged by. They espouse the superiority of black culture, yet have departed in droves from the seats of those same cultures, to live in lands where they seem determined to be despised. But hey, if race is such an issue and if, as they insist, one drop of black blood can have so much influence over life outcomes, and culture is everything, did anybody stop to think that maybe Lewis Hamilton’s culturally unusual – nay, unique - supremacy in Formula 1 might actually be down to his white heritage?