Don't you just hate that?

There I was, on Friday night, responding to a Twitter follower who had announced his intention to procure a tasty takeaway. Next thing I know, my account is suspended. For what, you may ask, which I did.

"Your account has been suspended and will not be restored because it was found to be violating Twitter's Terms of Service, specifically the Twitter Rules against hateful conduct.

It is against our rules to promote violence against or directly attack or threaten other people on the basis of race, ethnicity, national origin, sexual orientation, gender, gender identity, religious affiliation, age, disability, or disease.Additionally, if we determine that the primary purpose of an account is to incite harm towards others on the basis of these categories, that account may be suspended without prior warning."
Wow, I did all that? The next question has to be, how? By using vernacular, and a bit of nostalgia. The tweet which released so much venom is below. 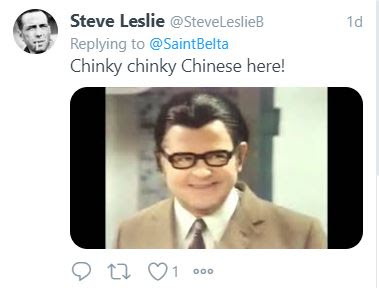 Quite the monster, am I not? So, here I am again, locked out in the cold... with my 'rubbery' chicken.
See you on the other side some time.
Posted by Batsby at 06:27