While still on Twitter suspension (during which time I have achieved many useful things; perhaps I should get suspended more often?) I can nevertheless still browse the site and see what’s winding folk up. Today I came across this tweet: Link Professor Bill McGuire modestly bills himself as “Volcanologist, climate scientist, broadcaster, activist, socialist, best-selling author…” Author of what, you may ask? A new book called Hothouse Earth, in which this Emeritus Professor of Geophysical & Climate Hazards at UCL posits the gloomiest of dooms ahead for the planet.

And why not, eh? It’s a hot topic (pun intended) and he's bound to earn a few capitalist quid from flogging this dead horse.After all, it’s not like he’s going to be contradicted and he is certainly not going to be proved wrong in his lifetime; he’s 67 and the cataclysmic forecasts are projections hundreds of years hence. But let’s have a go anyway, shall we? The article he links to predicts a worst-case scenario of 5 m sea level rise by 2500. Yes, 2500, which is 300 years away. Nothing I could see in the Guardian article suggested McGuire’s sensational 52 m prediction.

His career has long been founded on doom and disaster – you wouldn’t be inaccurate to presume he has a vested interest in scaring people – beginning with an appointment some thirty years ago as Professor of Geohazards and Director of the UCL Hazard Research Centre. A glance at some of his book titles gives you a quick study of the man and his modus:

Oh, he also blogs for Extinction Rebellion; make of that what you will.

A tour through his timeline reveals all the expected tendencies: anti-Tory, pro-socialism, hater of all things fossil-fuelled, calls for state-run utilities, Palestine… it goes on and on. Tweet after tweet reveals him not to be the data-driven, serious scientist he tells himself he is, but rather a partisan people-hater. We need top-quality minds to be working on this stuff, and we need properly coordinated energy, social and economic policies, yet from what I see, the people with the most influence tend to be these activists posing as pragmatists.

Whoever inherits Boris Johnson’s crown needs to very quickly get a grip and clamp down on the apparent knee-jerk responses to every bit of climate quackery. If those sea levels really are going to rise we need to be properly planning for decades, if not centuries in advance to adapt to the effects. And given that nothing we do right now will have any measurable effect for half a century hence, we can afford to divert our attention and resources to solving the current difficulties. The green shit can come later. 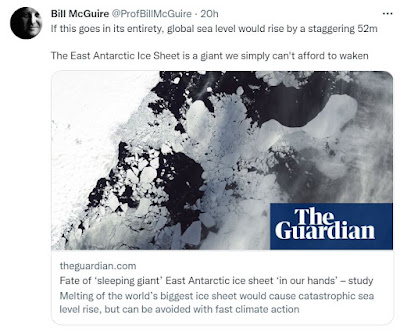 If this goes unchallenged people
like McGuire will earn a fortune.

I am no climate change denier, but neither am I a climate change junkie. I have no need to search for the next fix of apocalyptic rhetoric. I am, I imagine, more in tune with the vast majority of the Earth’s population, willing to work on my own energy budget just so long as I can see that my efforts are not being hamstrung by governments lurching from one faux-emergency to another. So let’s apply a bit of common sense here. Get back to gas, frack for victory, dig up a bit more coal, keep developing diesel, but most of all, let’s just keep a level head on our shoulders.