Squatting takes an upwardly mobile trajectory in this story from the newspaper most likely to carry it and yet the DM's stance is, contrary to expectation, almost pro the squatters.

The squatters, for their part, insist they don't claim benefits, working as necessary to fund their lifestyle and somehow managing to connect to services without, apparently, paying for them. A simple living need not cost a fortune and the needs of the young and fit appear to be fulfilled by various forms of noble scavenging. Apart from the bit about free utilities, I'm sort of with them, but they justify their occupancy as 'caretaking', which is simple bullshit.

Living for free or nearly free? I applaud that too. Thrift is a diminishing virtue and should be soundly commended. Freeloading off other people's endeavours, though? Oh, shit, it's back to the entitlement thing, isn't it? Why should the owner have the use of this nice big house? It was just sitting there empty. If the BBC don't come and get their licence fee, why should I volunteer it? No one has been to read the gas or electricity meter, so it must be free gas and 'leccie, right?

This isn't just squatting in a house, it's sort of squatting in the economy. Nothing is free. Nothing. And something for nothing is, effectively theft. Stores employ store detectives and businesses employ debt recovery agencies because, despite the egalitarian cries of the naive, people are not uniformly honest. Every time somebody takes something not freely given, somebody else suffers a loss. We all pay higher taxes because some people don't pay any. We all pay higher insurance premiums because some like to fiddle their claims. And somewhere along the line the resources not being paid for by the squatters are being paid for by the blameless, honest majority. 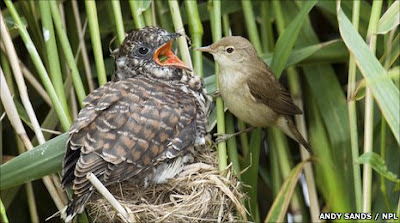 A squatter, yesterday
It's hardly the squatters' fault; this is a phenomenon well known in nature and they are merely following their instincts. The cuckoo, for all that its cry is hailed as a harbinger of spring, is in fact a monstrous, murderous interloper, disposing of its unwitting adopted siblings and taking everything for itself. But while cuckoos can't outgrow their disposition, it's amazing how quickly humans do. Once they buy a house of their own.

So, to the amiable young rascals occupying Clifton Wood House, good luck to you. Enjoy your time there. But when the bailiffs eventually turf you out please have the grace to go without a fuss and recognise there is nothing noble about cuckoos.
Posted by Batsby at 06:03