The chatterers are railing against the UN agenda to ‘build back better’. I think that is right, too. As an ambition would you prefer to build back worse? They also point to the ‘massive conspiracy’ that is Agenda 21, a non-binding action plan from way back in 1992 that is so far, two whole decades past its target date to achieve global sustainable development. As a sinister plot to rule the world it is pretty poor, given that it will also miss its current optimistic deadline of 2030. So much for all-powerful elites, eh?

How can it not be right to wish for a more equitable world, one where developed companies do not relentlessly pillage the third world; one where we all give a little for the common good? And for all the gnashing of teeth The Great Reset is no Machiavellian plot to subjugate, rather is an injunction to curb some of our excesses. If you are on the breadline it is not aimed at you. If you are self-sufficient it is not aimed at you.

But if you are a rapacious super-consumer who disproportionately eats up resources with an arrogant sense of entitlement it may be aimed at you. If anything, then, the great reset disproportionately affects the very people its opponents rail against on a daily basis. You and I are impotent against the grotesquely wealthy, the egregiously powerful, so isn’t it a good thing that world leaders (who are not these wealthy and powerful people in the main) are taking a stand?

It would only ever be conjecture to imagine a world where nobody has an excess until everybody has a sufficiency; that world will never exist. Our species survived and evolved because of greed, lust, desire to succeed; strip that out of our DNA and we cease to be human; we are back in the forests, grubbing about just to survive. It’s just a shame that the instinct which ensured our success also inculcates envy.

Humans thrive on competition, both directly and vicariously. And the very best vicarious success is that which you achieve via your offspring. People might agree to an equality pact, but they will break it in a heartbeat if it gives their kids a head start. Who wants their kids to be average? (There are several types of average but none of them are desirable. Nobody want to be the median and only the unthinking dullard wants to be the mode. The alternative is just mean. 😉) 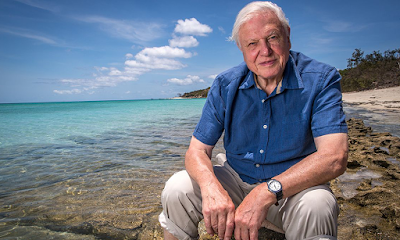 This man is not your enemy

So what it boils own to appears to be this: conspiracy of my guys to achieve what I believe in = good; conspiracy of others to an end with which I disagree = bad. Also my conspiracy is not a conspiracy, but their aims, by whatever means, most definitely is a conspiracy. I think that’s the reality; I think that’s the sane view. Occam’s Razor tells you that new-world-order cabals couldn’t organise a piss up in a pub; this has been confirmed time and again. David Attenborough wants a better world? What’s so sinister about that?

Email ThisBlogThis!Share to TwitterShare to FacebookShare to Pinterest
Labels: Agenda 21, Build back better, The great reset