Thoughts of an Angry Gammon

The intended insult ‘gammon’ is usually accompanied by the invocation of an angry person, screwed up by hatred and unable to process a world in which black people aren’t merely servants. This is funny. It is funny because it so grotesque a caricature that even Spitting Image would reject it as facile and it is funnier still because so many angry young people actually believe it.

There they are, huffing and puffing, going red in the face and looking quite gammony as they chant their slogans and jab their pointy fingers and raise their black power salutes, while kneeling before their new masters. Hey, young people will believe anything, right? But belief in false prophets is, sadly, not confined to callow youth; plenty of older folk have gone corona crazy as they try to make sense of their current, temporary state of being.

The coalescence of all their suspicions, the apotheosis of all their tinfoil hattery is the out-in-the-open conspiracy of the World Economic Forum and ‘The Great Reset’. Oh. Come on! Have you seen their handy little infographic (below)? Fuck me, that’s going to take some joining up! But just apply that well know razor to the actions of our current government. The same people who think it is being controlled by extra-governmental forces are also critical of its farcical incompetence. I’d put it to you that if some all-powerful organ was really pulling the strings, the marionettes would at least be dancing in time.

Ah, but that’s exactly what they want you to think, say the Resetters (everything has to have a label these days). They want you to believe it’s clumsy rather than coordinated. And then, as if this somehow validates their supranational control theory, they point to Sweden which did the opposite of what most European countries have done. This is as sophisticated a level of doublethink as employed by the practitioners of Critical Race Theory which simultaneously posits that both racists and anti-racists are racists… as long as they are white.

I sit back and laugh at all of this because, while organisations like the WEF might have high and mighty ambitions and BLM may think that by stoking the race wars they will somehow create tolerance and light, ultimately it is down to fallible humans to bring about change. And this they will do as they always do not by combining forces in some great global crusade, but by individually exploiting opportunities that come their way.

And anyway, so what if the powerful want to create a better world? What’s not to like? If their methods are excessive you will resist. If their ideals are not yours you will reject them. And please (oh, please!) stop referring to 1930s Germany every time you want to validate your fears. What am I doing to make the world a better place? Well, for one, I’m not spending my time jumping aboard the latest hoaky bandwagon and panicking.

When you all come back to your senses don’t worry, all your usual gripes and grievances will still be there to wallow in. If you hated Boris Johnson before you will still hate him later. If you think that Extinction Rebellion are a bunch of unemployable unwashed louts then the soap dodgers will still annoy you. The only thing that will be reset will be your level of angry and that will dissipate once you put down your placards. 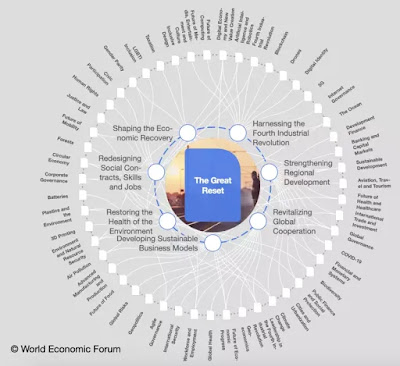 This all looks simple enough...

But I do see, now, the simple utility of bread and circuses. Lockdown has given too many people with too easily stimulated imaginations plenty of incentive to make mischief. And far too many, with too easily suggestible sensibilities have followed them. Following the breadcrumb trail to grandma’s candy cottage has made some of you quite giddy with the excitement of a new, imaginary enemy to rail against. Help is at hand, however; I hear the coming vaccine will contain a powerful sedative which will render you compliant and quite, quite content.

Email ThisBlogThis!Share to TwitterShare to FacebookShare to Pinterest
Labels: The great reset