Hard on the heels of yet another barbaric muslim atrocity and the insistence by the close muslim community that these devout followers of islam are not real muslims, the Chancellor announces with some degree of pride a new 50p coin bearing the words ‘Diversity Built Britain’. Not content with that simple lie, he then states in a tweet: “I have seen first-hand the contribution made by ethnic minority communities to Britain’s history.” That would be all the fantastic ethnic historical figures of the last 40 years, then?

This is what propaganda looks like and it is bolstered by the continued presence in the broadcast schedules of the likes of Ash Sarkar and Yasmin Alibhai-Brown and the grotesque Kehinde Andrews and Shola Mugabe Umbongo from SOAS, banging the race drum for all they are worth. Yes, they may be making black British history now, but none of it is helpful; it is just a non-stop demand for special treatment and unearned reparations. There can be no statues to celebrate their divisive actions.

It seems there is no position so extreme that the BBC will not give it oxygen, unless that position represents a white viewpoint. Whatever the topic, time should not be devoted to giving the majority view. Where is the balance? Where is the platform given to people who espouse personal responsibility and don’t forever demand that the government bows down before them? Important debates are not being had; important voices are not being heard.

I haven’t watched BBC Question Time in an age and not just because it airs a mere five hours before I get up to go to work. I have also tuned out of the weekend politics and discussion shows because they demand I spend far too much of my time listening to people with whom I profoundly disagree. Now, you may say, one ought to give ear-time to those with whom you disagree, the better to understand their argument and perhaps to empathise with their world view.

Fine, but why is the same tolerant patient demeanour not expected of them? It is okay for them to call me a Nazi, to insist that I live a life of hate, that I am a racist who despises all people of a different skin colour. But where is the condemnation of them when they blast me for the colour of MY skin? Hypocrisy is too weak a word; we need a new one to describe this prolonged attack on ordinary, decent, working people. This has been going on for decades now and every time somebody gets close to having a platform to air a contrary but no less valid viewpoint, they are screamed down.

Katie Hopkins, Darren Grimes, Roger Scruton, Douglas Murray and plenty of others have been de-platformed. Hell, even Germaine Greer was deemed insufficiently acquiescent to woke mobsters. What Alibhai-Brown said to Laurence Fox on Jeremy Vine’s show the other day would have had a nominal right-winger exposed to the might of the Crown Prosecution Service. What Darren Grimes said in exasperation some years ago, in the face of the extreme remain faction trying to overturn a democratic vote, has been held up by Femi Oluwole – yes a-fucking-nother one – as tantamount to inciting violence.

As I said, hypocrisy doesn’t begin to explain how some people get away with what would be a crime if aimed at them. The organised left, then, actually get to engage in violence and vandalism, with their never-ending assault on public decency. They get to exercise their right to protest with police protection while the police are deployed to whip up and then suppress those who exercise the same rights to different ends. 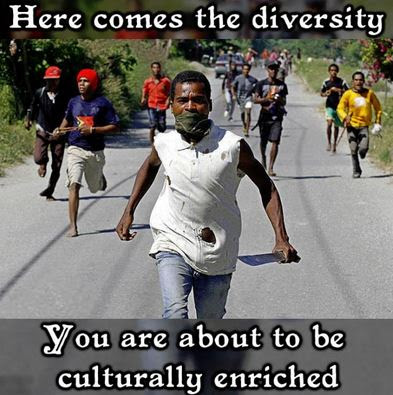 There is something sick about a society in which the majority view is regularly held to be the wrong view and those espousing it are regularly demeaned as bigots and fascists. And now, of course, Brexit is back on the menu. This means that the overworked insult ‘gammon’ is enjoying a whole new resurgence. That’s right, a term based on skin colour and used blanket-style to cast a majority sector of society as pantomime villains in jackboots. This is what diversity has built; and it has built little else.