Once upon a time, girls and boys (can we even say that any more?) the United Kingdom of Great Island and Smaller Ireland and all the other little islands wanted for little. It had power and influence, commanded respect and housed a population it could feed and defend who, if they wished, could ascend the social ladder from humble beginnings to become the captains of industry, the commanders of legions and proudly call themselves British.

And that’s where it all started to go wrong. Comfortable and secure, a coming generation of leaders held a vision of universal suffrage, cradle to grave welfare and an economy built on hope, ambition and hard graft. The ordinary working man could buy his own home in which to raise a family, the scions of which would prosper and aspire to even greater heights. And then the Ponzi model of governance was launched.

Now, we increase taxes and import yet more low-grade taxpayers to prop up an economy built on borrowing. And the beneficiaries of the borrowing are rarely those who have to pay it back. The cost of bailing out banks, of subsidising loss-making industry, uncompetitive institutions and forever funding useless hobby-horses such as the diversity and inclusion machine is forever borne by those who can least afford it.

The Marxist infiltration of the establishment began long ago and now we have nepotistic dynasties of politicians and civil servants still wedded to the ideas that all we have to do is carry on and the universe will provide. No need to train our own when we can freely import other, cheaper manpower. No real need to educate when anybody who can learn a new lexicon can earn a handsome living from repeating and distorting the flimsy philosophies of crank thinkers.

Food and energy security – national security itself – can be safely handed over to higher powers such as the EU. And while we’re at it, why make hard decisions about law and order and rights when those same remote and unknown mandarins will happily do this for us? This is England, we are one of the richest countries in the world, we’re fine, they told us for decades.

But how can it be, that in a country this wealthy, that we have poverty and squalor, life-limiting ignorance and worsening health outcomes? How has the population become so dependent on hyper-processed food, entertainment on demand, instant gratification and no-blame antisocial behaviours? How? Lazy, incompetent, foolish, vainglorious politicians. Politicians more focused on how they look, what their ‘legacy’ might be, and surviving the mud-wrestling pit of Westminster to fight again… to be elected.

But recent events have demonstrated quite clearly that the world is not our friend. The EU would happily punish us for leaving its deadly embrace and the USA no longer cares because we no longer matter. If there is going to be any hope for the future, it is time to stop relying on everybody else and stop blaming everybody else. The next 50-100 years should be spent on rebuilding this country as an independent, apron-string free nation.

And it won’t be easy. An economy built on fried chicken shacks, betting shops and black market labour does nothing for honest working people. A leadership whose gaze is forever fixed on its dwindling international reputation cannot possibly claim to represent the people of this country. And a commentariat obsessed with making the abnormal normal, by berating the normal will only increase and exacerbate the tensions and divisions. 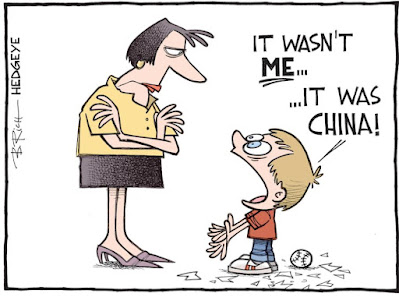 I don’t think we are anywhere near being capable of even beginning this journey, and certainly there is no sign of any consensus among the electable political options. Ghandi may well have been right. If you want to see change, be that change. You might not make waves and rebuild the world, but at least you might be able to cause a ripple which affects your world. Worth a try, surely?