I dunno, you wait fifty years for a new political party then dozens of them all turn up at once! There seems to be an appetite for change, and everybody seems to know what tasty dish will sate that hunger. A little bit of racism here, some misogyny over there, a dash of identity politics, easy on the rich jus of social justice, and a sprightly garnish of Little England to set it off. At least, that’s what the media seems to think.

The big issues of the national consciousness, the truly difficult, life-essential missions – gender, climate panic, diversity, ending slavery, pulling down statues, defending the indefensible – that’s already sewn up by the big three parties… - [checks] … big two parties. So the new, smaller parties are relegated to engaging the public on the silly little policies such as immigration, wealth distribution and poverty, work and welfare and pensions, housing, homelessness, national defence, policing and all of that trivial nonsense.

Goodness me, what woolly headed nonsense they spout. Imagine actually prosecuting criminals instead of getting in a fizz over hurty words! And what are these ‘borders’ of which the neo-Nazis speak? Don’t they know we’re in the age of Aquarius? And don’t get us started on rights. No, these insignificant parties who claim to speak for the disenfranchised, they are just trotting out the same old tropes that the old Conservatives used to believe in.

Modern polling techniques have been refined so that we can now accurately record the fact that the majority of people we choose to question will tell us what we want to hear. I don’t know who the stormtroopers of Ukip, For Britain, Britain First, Reclaim, Traditional Unionist Voice, the Christian People’s Alliance, the Wessex Regionalists and the Church of the Militant Elvis Party think they are representing, but I’m pretty sure their people never get asked.

Such is the rarefied air that the political pundits breathe that they never have to inhale the toxic fumes of desperation, the miasma of hopelessness, that emanate from the methane plant of humanity which is beneath their dignity. Ordinary people – the dopes with a vote they don’t deserve – are only good for entertainment, after all. Look how fat, look how ugly; they are no better than animals, are they?

Maybe they have a point, but if you are going to keep 90% of your population in ignorant servitude it might be a good idea, now and then, to check in on their welfare. After all, the police force are recruited from their ranks, as are the military. Many of them can use tools and, despite what the political classes seem to think, many are perfectly capable of forming opinions and holding grudges. Plus, they exist in far greater number than do you. 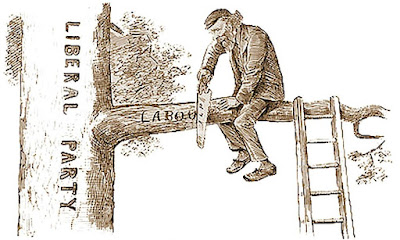 The chances of all the smaller parties coming together, agreeing on matters and becoming an effective alternative to the Tories and Labour is, I’m afraid, pie in the sky. And even if they did, their electoral chances are vanishingly small. Maybe the real way ahead is for everybody to re-join, or join for the first time, the main party which they think they can live with and then change them from within. Yes, yes, I know we think it’s been tried, but has it? Something to think about, maybe…