Nowt to do wi' me

I often wonder why we are here. And while I have considered that science has yet to provide an answer I don’t take easily to religion, either. The entirety of human history has failed to record a single provable nugget of evidence for the existence of a god or gods, but then science hasn’t proved the absence. Overall, though, I am happy to go along with the scientific method; that is, the theory that there is no god has withstood all attempts to disprove it.

But I don’t need any unifying theory for the reason for existence. Our time is short enough without getting overly worried about a question nobody has yet answered. As the Rochdale Cowboy, Mike Harding once observed “There I was, awake in the middle of the night, gazing up at the heavens and seeing the myriad pinpoints of light. Were there other worlds? What’s it all about? Then I realised it had bugger all to do with me so I went back to bed.”

I’m a pragmatist, on the whole, and as phlegmatically British in character as it is possible to be. I don’t need a reason, and I don’t need a cause. Maybe it is due to being brought up to strive for the best but when push comes to shove, you can like it or lump it. In wondering what it is all about I have decided that happiness – in all its dizzying difference of definition – is overrated. I’ve long thought that the human propensity for envy is a corrosive drag on our development.

People around the world suffer floods, droughts, hunger, incarceration, slavery and all manner of other privations, yet we in the west complain if we can’t get precisely what we want when we want. Infantile longing for stuff we can’t afford drives young men to lease ridiculous cars to advertise a status they have yet to and may never earn. And marketing inventiveness and cunning relentlessly promotes such excesses as botoxed brows and unbelievably ugly pneumatic lips. What is wrong with us? Why can’t we learn to live with what we’ve got, accept we’ve largely got what we need, and appreciate the effort of working harder for what we desire?

Being brought up with ‘mustn’t grumble’ and the unavailability of credit made my generation and those before it somewhat stoic in the face of disaster. ‘Not bad’ used to be an extreme compliment, whereas hyperbolically describing the new artwork on a can of so-called energy drink (active ingredients, sugar and caffeine; nothing more) as ‘awesome’ leaves you nowhere to go for a genuine superlative. We have literally talked ourselves out of our own language. 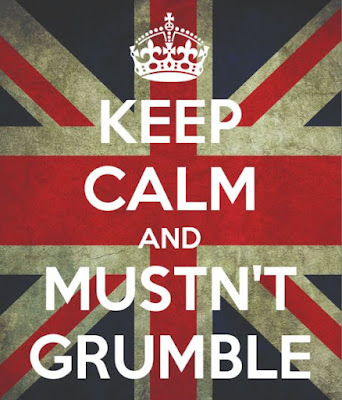 You can’t turn the clock back, I suppose, but I do long for the times when people were genuinely grateful for what they received and pride came from achievement, not acquisition. Our national life is less healthy for the notions of uncritical freedom, of unlimited rights. Putting genies back into bottles is notoriously tricky, but maybe it is possible to stopper the bottle to prevent any more stupidity leaking out. Ah, who am I kidding? Fuck it, knock yourself out, help yourself… just don’t come begging for more when you’ve run out of all proportion.