Lisa Nandy, quite rightly, queried “Is this it?” following Michael Gove’s lacklustre lecture on levelling up, the government’s slogan-rich but content-free ambition for Britain. What Britain needs is not ‘an agenda’ but real action. People want proper education, decent jobs and dignity, and most of all, I suspect, the freedom to get on with their lives without the constant nannying of the state.

It is said that 1 in 5 of the population is disabled. Oh, come off it. That can only be the case if you accept the determination of some to reduce every difference to the status of a special need. Soon, being taller or shorter than the average height will no doubt qualify you for some sort of payout, programme or pressure group. You prefer it in red? Fire up the FundMe! What an insult to people with genuine needs.

Soaking the rich will do nothing. As has been demonstrated many times in many places, over-tax the successful and they will take their success elsewhere. Windfall taxes are nothing but toothless, headline grabbing soundbites. What is needed is a restructuring of society, but in our own image – not the fanciful rainbow nation of misfits the current crop of social engineers covet.

The problems of the third world can never be solved, or their privations eased by allowing a tiny fraction of their number to sink us under the millstone of diversity. We don’t want strangers to care for our elderly. We don’t need yet more cheap labour to undercut our wages. We need a country in which every worker should be able to achieve the simple dream of a roof over their head to call their own and something better for their children in the future.

Yes it will take years, generations, even. But we have to start somewhere. If we said, right now, "everybody here who has a British passport is a Briton and entitled to a stake in the future, but we are full up, so no more", the cheers would lift the roof. We might need to accept shortfalls in those industries which have, for years, taken on minimum wage immigrants and turned many low-status jobs into work that only foreigners do, but surely that was more than a bit racist anyway.

Where do we get the workforce, especially the educated workers to fill the gaps? Well, why not start on those hundreds of thousands, if not millions, whose ‘work’ does nothing of any worth; redeploy Human Resources staff, useless consultants for faddish causes, diversity twonks,  and everybody engaged in perpetuating the race, class and gender wars. Cancel their roles entirely and get them into frontline jobs. Some of them will be brilliant, some of them will go hungry, but their sacrifices are necessary and would be welcomed.

And then turn to the rest and ask them what they want. The ordinary working men and women of this country should be the key to the future. It can’t be impossible to pay them properly, incentivise them to want to get on, encourage them to push their children to do better still, as used to happen not so very long ago. 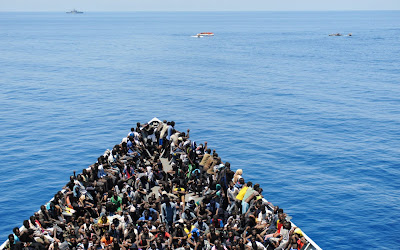 It will take decades and a lot of people may have to face a life which doesn’t give them an easy time, but faced with this or the alternative – that the UK becomes a dumping ground for the world’s problems and everybody below median income becomes a ward of state - is unthinkable. Government has to own up to the fact that there is no one-term fix; if we want a country fit to live in it has to be a lifelong endeavour, with everybody on the same team; Team GB.

Email ThisBlogThis!Share to TwitterShare to FacebookShare to Pinterest
Labels: Levelling up