In a jungle in Borneo a bird of paradise struts and puffs himself out to twice his actual bulk and dances to attract a mate. He grows an extra-long tail feather, develops bright throat flashes and crests and generally preens and pouts until he gets himself laid. He doesn’t know why, he just knows he has to do it; the unthinking drive to procreate. Richard Dawkins, in The Selfish Gene posits that it is not the bird, the tiger, the human that is the purpose of life but the simple duplication of the gene itself, which has no other behaviour than replication and occasional mutation.

Evolution by natural selection of more favourable mutations is an elegant process and discounting the hogwash of the Intelligent Designers it is a demonstrable truth. Until somebody actually proves the existence of a higher being the sanest notion is that there isn’t one. Such a shame that billions of people feel such a need to believe in something ‘better’ that they set about killing each other in its name. But hey, fuck ‘em; they’re wrong.

From single-celled slime to air-breathing fish, to shrews to apes and on to man, here we stand, erect and proud and yet still obsessed, above all else, with procreation. That’s your genes working you there; working you like Geppetto worked Pinocchio before he got his wish. Working you like Shari Lewis worked Lamb Chop. Like Len McCluskey works Ed Miliband… You get the picture.

Is there such a thing as Intelligent Evolution? Who knows, but among all the species on earth one of them keeps trying to better Darwin. While the natural order is that the weak go to the wall, some strains of mankind like to tidy that process up a bit and eradicate whole tribes of undesirables, usually in the name of religion, which is kind of ironic if you think about it.

But why can’t we all live together in peace and harmony, you ask? Simple really, because somebody, somewhere is developing an extra-long tail feather, that’s why. You try and impose equality and pretty soon you realise that no matter how hard one strives to be mediocre some are genuinely more equal than others. The dangerous ones are those who believe their extra-equal qualities must be used to the benefit of mankind and instead of simply getting on and getting individually wealthy, decide to tinker with the whole of society.

Thus making something that people want and selling it at a profit makes you a scheming capitalist devil. The pursuit of individual excellence makes you a selfish non-contributor, doing what comes naturally and putting your own family first makes you a pariah. And employing simpler people on a lower wage than you take for yourself is the very epitome of the profit-seeking evil that lurks in your dark heart.

No, the evolved socialist will have no truck with that. For the furtherance of humanity all must be controlled by the few who know best. So to hell with the nuclear family and to hell with property ownership. Damn you patriotism and nationalism and begone you nasty, grasping individual. Together we will build a better way. Together we are strong. Together we go forward into the bright new future; comrades all. Sounds wonderful, doesn’t it?

So, we dilute the indigenous population to drown out the natural protest. We create entire new industries in diversity, multiculturalism, social services and ‘wellbeing’. We police it all with a legion of hysterical watchmen covering racism, sexism, homophobia, transphobia, ageism, invalidism and general bigotry and we make having an aversion to anything and expressing an opinion of it into a hate crime and prosecute accordingly. To bring peace and stability, say the socialists, we must create division and fear; it’s for their own good. It’s Intelligent Evolution.

But still there’s the yearning to have that edge; to find a mate. And the genes show their hands. Union bosses earning a packet yet living in subsidised social housing. Various ‘Czars’ paid handsomely by the state to do very little, if anything about things that can’t be solved by diktat. Armies of lawyers making a living from the engulfing tidal wave of new ways to become – or not become – a convicted criminal. Wasteful councils building shiny new offices, retiring their executives early, then buying them back as ‘consultants’. The list of niche opportunities for the ‘more-equal’ goes on and on.

It’s a funny old thing, evolution. Some species thrive and some don’t survive. Some develop ever stronger while others dwindle and become extinct. The only thing that drives it all is hanging around long enough to reproduce. The more you do that the bigger you win and some of the longest surviving species on earth are the parasites – they make a living entirely off the efforts of others, adapting as necessary to continue the feast. 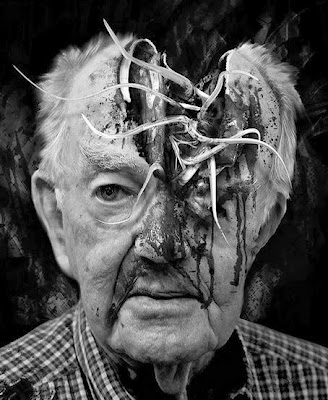 Socialism, in a nutshell

Thus New Labour – the Tory-lite concoction of Blair and chums after a brief flare of colour retreats to the margins and the über parasite reverts back to Old Labour, the most successful survivor of western politics. It’s not who is better who wins, it’s just who wins. But evolution can surely do better than this?
Posted by Batsby at 10:58