Welcome to a NEW Labour

This blog is so much easier to write than usual. Usually I have to do at least a little in the way of research before adding my own flights of fantasy finishing touches but today, none of that is required. No, siree Bob, I’m going to take a leaf out of the master’s book of proselytising and do what Ed Balls did yesterday at the Labour conference; I’m just going to wing it. At least that’s what it looked like because surely his wild-eyed pronouncements had little basis in provable fact.

Politicians really shouldn’t try comedy. He cracked a gag about David Cameron having a tiny cock which drew uneasy laughter from the floor. Having hitherto supported the HS2 project he suggested, to the other Ed’s discomfort that this had been a joke all along. But in a masterly bait-and-switch operation he rescued the gig with this hilarious finishing line; in US presidential electioneering mode he acknowledged "my friend, our leader, Britain’s next Prime Minister, Ed Miliband!" How they all laughed! (Although, to be fair, I’m never sure with Gromit – he does his best, but his best looks like he just bit into a lime.)

The rest of Ed Balls’ set was a series of throwaway lines about all the things he was going to buy and throw away with all the money he doesn’t have and can’t raise to try and buy the votes of people who don’t know who he is and can’t pronounce his name or, as yet, don’t even live here. Both the Eds, however, have played their general election pledge cards close to their chest so, as they won’t do it, I’m going to write their 2015 election manifesto for them. It will be just as factually based as the real thing. Here goes.

Free Childcare
Yes, a free child for everybody! We don’t care. Free at the point of abuse, your new child (colours vary from advertised) will be delivered to your door whether you want one or not. You will then have an immediate follow-up visit from The Social who will take the child back into care. That way you can have all the benefits of socialist family policy without actually receiving any benefit from or for the child itself. We will use the huge amount of money saved for our flagship homebuilding policy.

Homes for all
Everybody should have a place of their own; somewhere they can call home. And as everybody needs to also be mobile to find work we will ensure every native Briton has transport as well. Sod HS2, under Labour every woman, every man will join the caravan of love as we combine the two and provide every British family with their own motor home. And trust us you’ll need one in order to join the mass exodus from Albion as we flood the country with immigrants who are essential if we are going to build all the new houses we need to accommodate them.

Healthcare
Our NHS is the envy of the world. Really, they’re green as hell with it out there in Bongo Bongo Land. It’s free, it’s expensive and therefore good and its one of the last sticks we have left to beat the Tories with. So, we’re making it not only free but truly universal.  For instance, as part of our reform we are going to remove the stigma from mums who face a loss of benefits if they refuse the MMR jab. That policy will not go ahead; instead we will just make MMR compulsory. Why should you have the agony of choosing when you can just have socialism instead?

Feeding the nation
Swans. Henceforth the Queen’s privilege will extend to the nation and we will all dine on swan.  At least until they are extinct, whereupon we will re-designate geese as swans. When they run out it will be chicken-swan then pigeon-swan, etc until finally the scourge of the swan will be a distant memory. Food for all, comrades, wherever you can find it.

Money
Money will be banned. According to shadow work and pensions secretary Liam Byrne, to salvage the Coalition's welfare reform Labour has launched a "Universal Credit Rescue Committee". This committee will propose the phasing out of money in favour of a voucher scheme. After all, once the means of production is notionally back in the hands of the workers, who we simply don’t trust to be fair, everybody will be made equal by diktat. In fact, sod the vouchers; you can just collect your handouts from the government depots. Who says we’re anti-British? The British LOVE queuing! 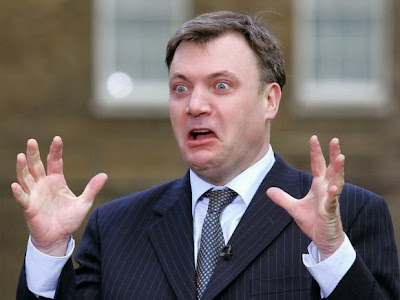 We have many similar policies of course and yes, one day you will all get your hover boots, but for now rest easy that the wealth of the nation will be wisely husbanded by the party that brought you multiculturalism, mass immigration, health and safety, political correctness and tax & spend – for most of which we have apologised. Remember New Labour, No Danger.