The old certainties are gone.

Nobody now expects a youthful marriage to last beyond a few short years, the outrageous cost of the big day rising in inverse proportion to its expected longevity. And as it gets rarer it obeys the laws of supply and demand and becomes more expensive still. Consequently many just don’t bother and go ahead to raise unconsidered quantities of children (the misguided commitment to a current partner being measured in procreation) who will grow up to not know what a family life could mean. Their life chances are limited and they go on in turn to repeat the mistakes of their parents.

I have always considered it an act of supreme arrogance to bring, kicking and screaming into the world, a child who has not been given that most basic of human rights – choice - and then to cast its fortunes adrift on the rocky ship of state. Of course there are good parents to which none of this applies (still the majority I dearly hope) but even their careful ministrations are wont to go astray if they do not have the means to pass on privilege to their offspring. If you can’t afford private education, or you don’t have wealth to confer, or at least a stake in the family business, your children may have opportunities barely better than the guttersnipes.

But it wasn’t always that way. A mere half a century ago it was possible for a dull but assiduous child to enter a trade, learn skills for life and have a reasonable expectation of being able to rely on those skills until such time as the state repaid all those years of taxes by providing for a basic but comfortable old age. Even a drone by nature could have a fulfilling life and a gentle retirement, provided for by a system in a state of balance. Once graded and sorted, your part of the bargain was that you could dream but not expect too much, living your life in your allotted place. It wasn’t as bad as some would have you believe.

There were always opportunities of course, as there are now, for the bright and the beautiful, the gifted, talented, special and just downright lucky to break out and scale the dizzy heights of material success or widespread acclaim, but just as before, such bright-burning stars are the exception. If your sprint for the tape fell short you could always fall back on what you knew, eat humble pie and get your old job back; we always needed your skills or your graft.

But all of that has gone now. The world doesn’t actually owe you the living that a few short decades ago you had a reasonable expectation of having; a stable foundation on which to build a modest family and lead a useful if unexciting life. There is no longer a permanent local industry in which to stake your place, because the world is different and the globalisation that makes it so cannot be reversed except by you becoming parochial and diminished; giving up your iPads and living off the land. I can’t see that happening any time soon.

I was thinking all this as I sat in my car at the little gravel car park below White Well Spa Cottage on Ilkley Moor, as the rain poured from the grey veil of clouds shrouding that totemic slab of gritty Yorkshire landscape. And as I watched the rain slick the short moorland grass I realised I may not get many opportunities to see my home county again. Don’t panic; I haven’t been diagnosed with anything nasty and terminal, but rather than eke out a miserly retirement, watching the once greatest nation on Earth rapidly and ignobly sink into the dreary sludge of mediocrity, I plan instead on embarking on one last big adventure. And what greater adventure could there be than to leave these blighted shores and settle in a far-off land? 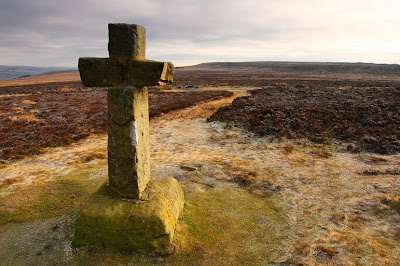 Goodbye to all that

Rather than feel a stranger in my own country, as I have for many years now, I feel there’s more honesty in becoming a real foreigner in a proper foreign country. Instead of watching the news with anguish and bemoaning the demise of donkey strangling, or joining protest at the lack of facilities for public wife-restraint, I’ll be able instead to just sit back on the sidelines, pointing at the quaint locals going about their incomprehensible business. In some ways it will make more sense than watching the death throes of a nation I used to understand all too well.

So over the next twelve months I will be making my preparations to say farewell to Yorkshire and farewell to England. And when I go I will definitely be taking a hat.


(For Americans, southerners and those of a southerly disposition, the title is derived from the well-known Yorkshire folk ditty "Ilkley Moor bar T'at", which translates as "without a hat". If you don't believe me, go here.)
Posted by Batsby at 07:50